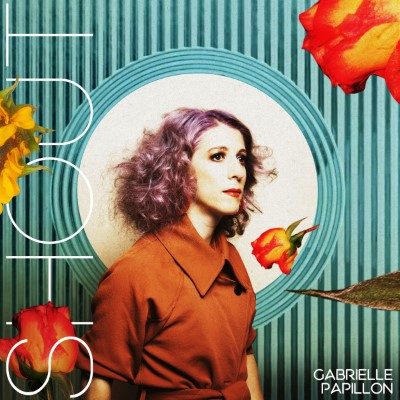 Shout is the newest album from Halifax based artist, Gabrielle Papillon.

Behind the generally upbeat, pop, new-wave melodies of the album, there’s a feeling of apprehension that hangs over Shout — as if the artist wants both us to jump up and dance, but she can’t help but shout about nagging fears though the melody. “Shout” prominently features Gabrielle’s powerful, yet honeyed vocals, but also piano, synths, drums, horns, electric guitar and even on one track, a rap break. The mix of cheerful accompaniment is a great support to the often wistful lyrics and vocals to make Shout a melancholy, but hopeful record.

Standout tracks on the album to me were “Don’t Want to Go to Bed” and “Last Deep Breath”.

“Don’t Want to Go to Bed” starts with a simple piano chord before the song layers on vocals and instruments to build a sweeping soundscape, as if the listener is caught in the eye of a storm. This is works perfectly with the lyrics which detail the pain of both wanting to be isolated, but also desperately wanting to make a connection — The barrier being anxiety (or even a panic attack). I particularly like the line “Don’t want to go to bed, don’t want to be alone, I think it’s something in my head, don’t want to go out” which well illustrates this conflicting pain.

The track “Last Deep Breath” has a haunting, an almost spiritual rhythm to it, with a base of low repeating piano chords, powerful choral singing, and even the sound of breathing. Using this strong spiritual base, the track commands the listener to take strength from the song before leaving whatever has been holding them back (ex. anxiety, frustration, pain) behind — to take one ‘Last Deep Breath’ before transforming into a better, more complete person. As the lyrics dictate “this is that wondrous step, the future you are calling… that power you have kept will blaze when day is dawning.” This track is a great parallel to other songs on the album, whereas other songs were about commiserating on common anxieties, “Last Deep Breath” acknowledges but tries to offer support to move forward.