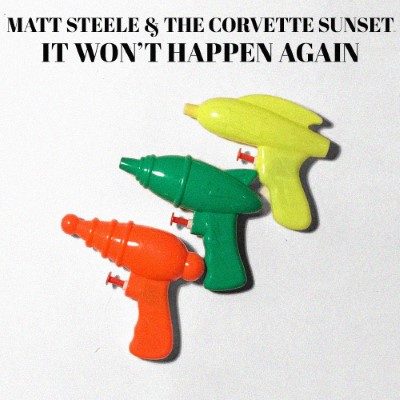 Matt Steele & The Corvette Sunset will be officially releasing their video for “It Won’t Happen Again” tomorrow, but readers at Canadian Beats are getting an exclusive premiere, aren’t you lucky?

In the video, Steele and his bandmates engage in an all-out water gunfight against a rival team of musicians at Point Pleasant Park in Halifax. Of course, chaos, and hilarity ensues.

“We’re all getting bummed that the temperature is going down, let’s think about how much fun we had this summer instead.”

Jeff Miller directed and edited the video. Last year, Miller first collaborated with Corvette Sunset on their video for “Handshake Deal“, which is also a must-watch and earned them a Best Music Video nomination during the 2018 “Best Of” Coast Awards in Halifax.

“Working with Jeff is so easy”, says Devin Fox (bass). “We didn’t have [the video] storyboarded or anything, really. Matt and I spent $150 on water guns. It was a fun day.”

Check out the video below and if you’re in Halifax area on November 5, check out their first residency show at The Local in Halifax, where they will be performing every Tuesday for the whole month of November.