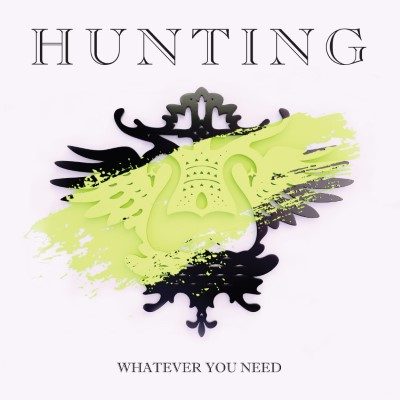 Whatever You Need is the newest album from Vancouver based band, Hunting.

As an album, Whatever You Need is well suited to its namesake: some songs are slow and gentle, some are fun pop, others are hard-rocking ragers. Upbeat, downbeat, bouncy, or slow, this really is an album that is ‘Whatever You Need.’ Featuring male vocals, the sound of Hunting is supplemented by female vocals, drums, electric and acoustic guitar, bass, tambourine, and synths to form their wide range of sound.

Standout tracks to me were “Gold Day”, “Black Shirt”, and “Whatever You Need”.

The track “Gold Day” captures an almost 70s vibe as it opens with some simple chords on a keyboard with a crisp drumline before opening up with lackadaisical vocals and a dreamy guitar riff. The modesty of the song helps capture the earnestness of the lyrics as they wish the listener shelter from a cruel world to enjoy a truly “Gold Day”.

“Black Shirt” is an interesting standout on the album as it pops to life with hard guitar riffs and aggressive drums. It feels like in contrast with other tracks that intend the listener to smile along, “Black Shirt” is the track intended to get your rage out in a safe space. However, despite this being a more aggressive piece, it maintains the other track’s sense of whimsy as it features xylophone tones in the chorus.

Finally, I knew that I was going to be a fan of the title track, “Whatever You Need” when it opened with the lines “Take the night train out to Berlin, we’ll do all the things that Bowie did.” What follows is an 80s inspired synth-pop track designed to put a smile on your face — one I think Bowie himself would have appreciated.