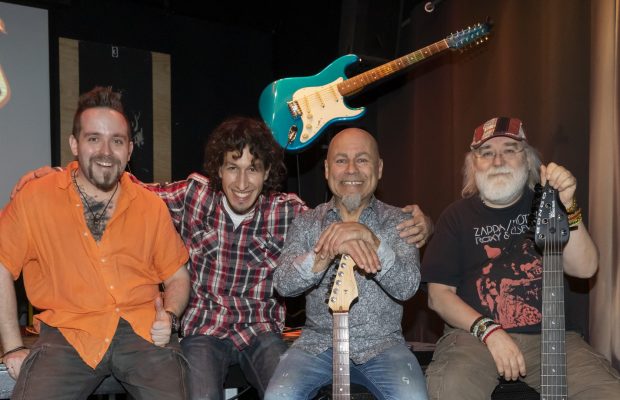 Quebec-based prog rock band, CIRKUS  has its roots as far back as 1977 when Serge Doucet and Alain Proulx met to create with some friends a progressive band that tried to make it, but that time was not a good moment for progressive rock. In 2016, the old friends, joined by lead singer Cedric Lucas and drummer, Martin Vincent united. The band released their album, Voodooland on August 1, 2019, which serves as a sequel to their previous album, Wild Dogs.

Check out the single, “How To Kill” below and find out more about the band via our Five Questions With segment.

I can appear to be a newcomer in music but it’s not the case. My first composition band was active as early as 1978. But, in these years it was no more really possible to live as a prog band anymore and we had to give up. Even in Great Britain the old prog bands turned pop or simply disappeared. So I did without having the opportunity to be released. Then I earned my life as a teacher and consultant but music still present in my life while I was producing jingles, music for films and for circus.

A couple of years ago, I met one of my old bandmates of the seventies Serge Doucet a guitarist and we decided to make it again with Cedric Lucas, an experienced singer in “comedies” and Martin Vincent a talented multi-instrumentalist. Then, CIRKUS became a reality.

The music is definitely progressive made by the fusion of different styles and textures. The beats are elaborated and influenced by jazz mixed with classical orchestrations all heavily grooved in a constant cinematic approach. Everything is always in tasteful textures displaying sensible harmonies and melodies as well in the vocal parts as in the solo instrumental parts not driven by performances but made to touch your heart. The style in itself comes with complete freedom to explore unexpected colours and horizons.

We just finished a year of concerts. We took this time to build what I think is a hell of a concert. We are really proud to present something that is literally an immersive experience. As the music is strongly cinematic, it was natural to make a show that would go the same way and so we did. Everything is there to bring the fan into a real voyage: projections, special FX, storytelling, and costumes. The wonder is that all has been thought to be presented in all sizes of venues with really low costs. We’re proud to plan to go back on the road.

Considering that our first album, Wild Dogs, was a double CD of 140 minutes of music followed by Voodooland a full CD for a great total of 210 minutes, it’s not an easy task to point a single song. But a new fan to our music could be well introduced by songs like How to Kill or Arrival.

Honestly, I spend much more time to work on my music than listening to other artists but I enjoy the music of artists like Patrick Watson, the bands The Box, Arcade Fire or the experimental Godspeed.