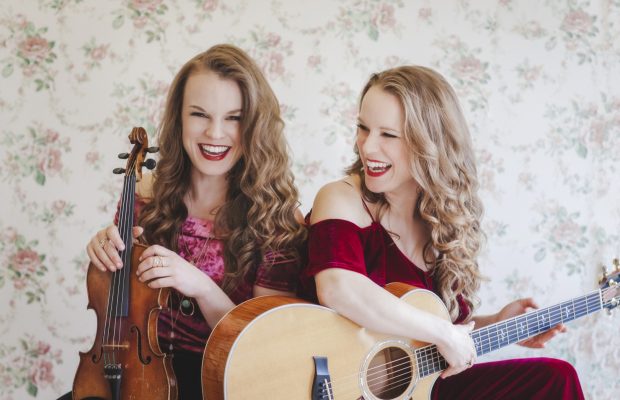 Country duo Twin Kennedy are back with new music, this time with their new single “Blindspot“. Making music and touring since their 2015 debut release It’s a Love Thing.

Sisters Carli and Julie Kennedy have been making music together since they can remember. After completing their Bachelor’s degrees in Music Production from the University of Victoria, the British Columbia-natives found their home in country music.

Since then they’ve received three CCMA Award nominations, including Interactive Artist/Group of the Year and two nominations for Fiddle Player of the Year (Julie Kennedy), their single, “Secondhand Gold” was the Grand Prize Award winner in the Country category of the 2015 John Lennon Songwriting Contest and the 2016 Lennon Award winner for Best Country Song. Adding multiple BCCMA nominations and two Vancouver Island Music Award wins, there’s no question Canadian country is embracing the Kennedy sisters.

We caught up with the rising duo to talk career highlights, living in Nashville and their brand new music.

It’s been a few years now since you released your debut album, It’s a Love Thing but you’ve certainly kept busy; has there been a highlight in your career so far?

It has been a busy and exciting few years since our last release. We have spent a lot of our time on the road, and it has been such a highlight to see so many new places. Since It’s a Love Thing, we have toured almost every province and territory in Canada, as well as 20 US states, Iceland and Sweden!

Your Christmas album A Twin Kennedy Christmas landed you in Rolling Stone among many more stellar reviews. What was that initial feeling like, to be recognized by such a prestigious magazine?

We will never forget the moment we found out the news that we were in Rolling Stone… Let’s just say, there was a living room dance party! It means the world to have our art recognized, and Rolling Stone was a definite bucket list feature for us!

How does the dynamic work between you as performers?

Being twins is a unique thing… We often get asked if we read each other’s minds, and the truth is, we do! We tune into what we call “twin-tuition” when we are on stage – we can sense how each other will sing or move during a performance. Sometimes we even sing or say the exact same thing at the exact same time without planning it! …There have been some (cue the Halloween music) spoooooky twin moments!

We feel lucky to have one another as musical partners. Our musicality and our energy as performers are very aligned, and it is special to have your best friend with you on stage and off.

Has there been a noticeable adjustment since moving to Nashville, compared to creating and performing in British Columbia?

We are proud BC girls (it truly is the most beautiful place on earth!), and we have a wonderful community of musicians and artists in BC. The bonus to spending a lot of our time in Nashville is that our community has expanded! There are many amazing artists from Canada and beyond based in Music City, and we have been able to work with so many of them now that we are all based in the same place.

Tell us about the writing and recording process for your new single “Blindspot.”

We were wrapping up an evening songwriting session with our friend and co-writer Rhett McDaniel. We hadn’t finished writing the tune we started that day, and Rhett said something like “I guess we’re in our songwriting blindspot today…”. Carli immediately sat back down and said “we have to write that song!” She picked up the guitar and started playing the opening notes that would soon become our new single “Blindspot”! We’re lucky that our co-writer is a night owl just like us because we all stayed up that night until 2:00 am to finish the song!

We knew we wanted to record the song as soon as it was written, and we produced the track with Dustin Olyan. Carli recorded the acoustic guitar track along with a stellar band, and Julie orchestrated and recorded the string parts on top of that. Making music can be such a vulnerable experience, especially when you’re creating something from the heart. The minute we started playing #Blindspot with the band, we had tears in our eyes. It was surreal to hear it come together and to have the sound coming through our headphones reflect what we felt writing this song.

From the writing process, how did the concept for the video come to be?

We love taking the story of a song and creating a video concept. We wanted the emotion of the song to show through in the music video, and we also wanted to showcase the beauty of Vancouver Island and our home province of BC. We filmed with our amazing director, Dave Wallace (Riptide Studios) on the picturesque Sombrio Beach, where the light and the scenery were so well suited to the vibe of the song. We also wanted to film on a beautiful winding road to allude to the “Blindspot” title, and we found the perfect spot right down the road from our parents’ house on Vancouver Island!

There is a lot more music to come from Twin Kennedy! Watch for an album announcement in early 2020! We can’t wait to share it with you!!!