Five Questions With The Vicious Cycles 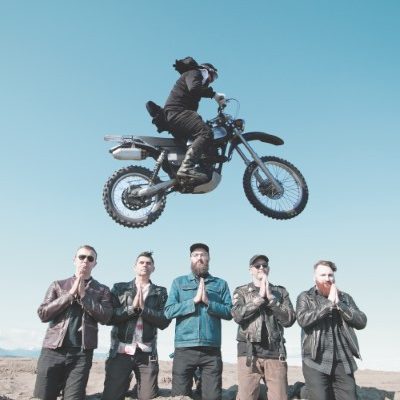 Vancouver, BC-based garage-punk rock favourites, The Vicious Cycles have recently released a video for “High Noon Scramble” which is the 2nd single from their latest album, Motorcycho.

In the video, the band wanted to pay homage to the annual ‘High Noon Scramble’ event, organized by local dirt bike fiends Filth Mode Motorcycle Friends. The ‘High Noon Scramble’ video was filmed at this year’s event and features a rowdy group of misfit dirt bikers, their friends, and community.

“This crew has been getting high on a 2-stroke engine exhaust and adrenaline for over 10 years now, meeting at a *cough* undisclosed location to race dirt bikes and have a laugh,” says bassist/vocalist Beardo. “Wild costumes, questionably ‘engineered’ ramps to jump off of, and motorcycles racing in every direction make the High Noon Scramble a giant party on two wheels.”

“There’s good times, bad people, chaos, fire, beer, and maybe the cops… actually that sounds like a Vicious Cycles show! All of this action inspired us to dedicate a song and video to the ‘High Noon Scramble.’”

Check out the video below and find out more about The Vicious Cycles via our Five Questions With segment.

Sure, we’re the Vicious Cycles, a motorbike obsessed punk rock n roll band from Vancouver, Canada! We just put out our latest LP ‘Motorcycho’ on Pirates Press Records, out of San Francisco, CA and we’re on tour through the United States right now. We’re sampling every chicken fried steak and pizza we can get our greasy mitts on.

Billy likes to write songs in his head while he’s riding his motorcycle. He brings them to practice and we all put our two cents in, arrange it, maybe add a part here or there.
Once in awhile Nick or Beardo bring a song too.

We just finished our West Coast Tour last Friday in Seattle and we’re playing at the Cambie in Vancouver on Nov 10th.

Our live show is really high energy, and we try to have as much fun as possible. That often means Billy jumping on the bar during the show or Norman lighting his theremin on fire! Sometimes stuff gets broken, there is chaos and fire, and everyone goes home happy.

This was a tough one but I think we’re gonna say ‘Motorcycho’. It’s a song about our keyboard player and spiritual leader Norm. Norm is Vancouver’s oldest teenager and owns something like 20 motorbikes!