Five Questions With The Family Soul 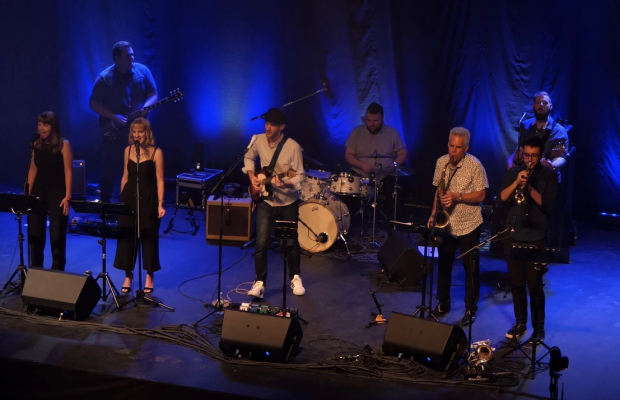 Photo Supplied by The Family Soul

Windsor, ON-based horn-fuelled soul band, The Family Soul released their first album, On The Shoulders Of…Vol. 1 last month. The band, which is fronted by Mike Hargreaves, AKA Soul Brother Mike (formerly of The Walkervilles and Michou) is a big band – usually about 7-9 people on the stage at a time, and is comprised of many of Windsor’s top musicians such as Kelly Hoppe, Crissi Cochrane, and a number of university and theatre trained musicians.

Check out the album below and find out more about The Family Soul via our Five Questions With segment.

Hi, we’re The Family Soul! We’re a large group of musicians in Windsor, Ontario, led by veteran singer-songwriter Michael Hargreaves (Soul Brother Mike, The Walkervilles, Michou). We formed in 2017 and have just begun actively recording and releasing, launching our debut album “On The Shoulders Of… Vol. 1” last month, with a new release in the works for early 2020. We’ve also founded a local label/collective called the Soul City Music Co-op, and are in the process of helping release music from our members’ other projects.

Lately, our repertoire has been mostly cover songs from the golden era of soul in the late 60s and early 70s, with a few funky numbers form the early 2000s to the present – and that’s what you’ll hear on “On The Shoulders Of… Vol. 1”. We originally formed as a backing band for Soul Brother Mike’s original music, which is a very modern R&B/neo-soul sound. He was the songwriting machine behind critically-acclaimed Canadian bands The Walkervilles and Michou, and is just now writing original songs for The Fam.

We usually gig about once a month, but November looks nice and busy for anyone looking to catch us in Windsor – we’ll be at Nola’s (Nov 15), Caesars Windsor in Cosmos Lounge (Nov 16), and The Thirsty Butler (Nov 29).

On-stage, we are normally at least seven or eight people, and sometimes as many as nine or ten. Each musician brings their own established sound and identity, and all are a part of other musical projects, bringing that experience and style to our group. You can expect to hear musical conversations – between back-up singers, horns, and the rhythm section – all calling, responding, and communicating. Soul music is all about devotion. It could be to a lover, to a purpose, or to the craft. You’ll hear that from each member in a live setting.

“Blessing In Disguise”. It’s a versatile song that moves between a sort of rock sound, to a ballad sound, to a funk sound. It also showcases saxophonist Kelly Hoppe (Big Sugar) and the entire horn section, as well as Ty Sharron’s lead guitars – really, it showcases each member and the versatility and energy of our set. Also, coincidentally, it’s a song by the Family Stone, which is our namesake, so there’s that added element of tribute.

Right now, we’re really loving Anders (check out his song “I Don’t Want Your Love”), the Soul Jazz Orchestra (“People People”), and our Soul City Music Co-op members Crissi Cochrane (“Sleep in the Wild”), and The Bishop Boys (“Might Be Alright”).