By Jordyn Armstrong on October 28, 2019@jordynhannah95 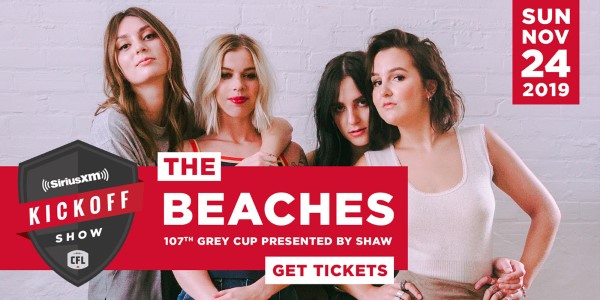 It has been quite the upcoming success for the Toronto band, The Beaches. On top of three EP releases, a JUNO win, several festival appearances and opening for The Rolling Stones and Foo Fighters, they can add another accomplishment to their list: playing as the SiriusXM Kickoff Show act for the 107th Grey Cup.

The performance will be on November 24th in Calgary. Other acts for the event include the Calgary Stampede Show Band and country music star, Keith Urban.

Urban and The Beaches performance is part of Universal Music Canada and CFL’s partnerships. This is also not the first time The Beaches has played a CFL event as they previously played the Tim Horton’s Field in Hamilton, Ont. as part of the 2018 Thursday Night Football Concert Series.

Tickets for this show are currently on sale.