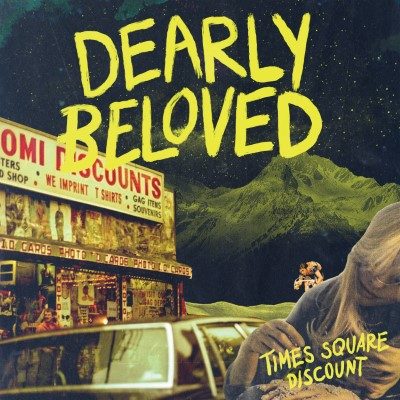 Times Square Discount is the newest album from Toronto based band, Dearly Beloved.

Times Square Discount is such pure fun anarchic energy, you can almost feel the hands of a moshing crowd on your back when your listening to it. The album features male and female vocals, guitar, drums, synths, samples, and even a theremin, all operating at eleven and higher. This energy is not surprising as The Dearly Beloved press release says the album was conceived on the road in over 26 countries, with 18 different guest artists and was partially born of “bingeing on Kubrick and drugs.” According to them, somewhere between the exhaustion and excess, they would explore their tour locations for inspiration to tie to their love of the dead director, and this guerilla-style investigation became the basis for songs.

Standouts tracks for me are “Close Encounters” and “Fuck the Banks”. “Close Encounters” as the name suggests is about an alien abduction, but the Dearly Beloved turns the event of abduction into something that’s more of a supernatural riot they want both you and they to dive into, rather than an object of fear. As for the track “Fuck the Banks” (which by its title alone was going to be a soft sell for me) is a pumping anthem with a slopping beat to push back against the capitalist machine. It’s a much slower song than the rest of the album, but irresistible in its message and pulsing energy. Overall, this is a great album to get the revolution started.