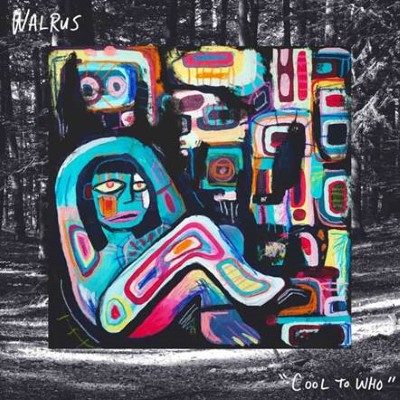 Halifax natives WALRUS are no strangers to the tour life. Heavy touring over the last few years, and even getting banned from a car rental dealership, the group have finally settled down (but not for too long) and made a full-length album entitled Cool To Who. 10 tracks recorded over 2 days, showing the best of the band. Let’s take a listen.

The opening track “Breathe” was not what I expected. A band labeled ‘garage-psyche’ opening with an acoustic track, a light beat, and distorted harmonies? Maybe I know nothing about garage-psyche. The following track, which is the album title “Cool To Who” is in the same boat. As I was going into this album with a different perspective, I’m very surprised how much different this is compared to what I thought, and how much I’m really enjoying it.

“Half Smoke” was one of the songs the bands released as a single, along with a very cool animated video. This song is where I focused on the lead vocalists very unique sounding voice. It’s a higher pitch than I normally hear which makes it stand out more overall.

“Marcel” is a beautiful acoustic ballad, while “Mr. Insecure” is more upbeat overall. “Played Out” was another single the band released, along with a great wrestling inspired music video. This song is one I considered my idea of garage-psyche coming into the album, the heavy melodic vocals and transedelic musical notes in the background throughout.

My favourite track on the album has to be “Bored To Death”. This is a song I could include on my daily Spotify playlist and it would flow great with all the other tracks I have. It’s a perfect mix of their style of garage-psyche, pop-punk and alternative rock, perfect for any kind of listener.

WALRUS has a unique name, unique sound and one of the most unique ways to be banned from a car dealership (Seriously, go read that story, it’s wild). This album surprised me right from the start as I was expecting something totally different from what I got, which is always a great surprise.