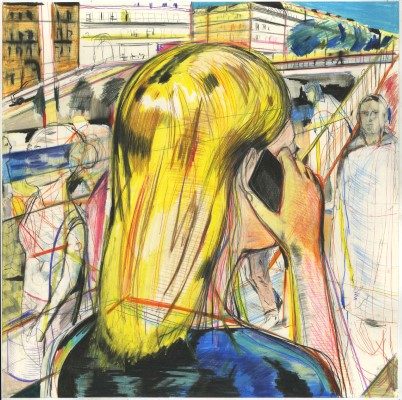 It has been a few years since Toronto-based singer-songwriter Laurent Bourque released his debut album Pieces of Your Past (2014), which won him Canada’s Stingray Rising Star Award. After this release, Bourque took a step back to re-examine his songwriting approach. Discovering that collaboration was the key, he took some time to co-write songs with others. Once he reached a catalog of over 100 songs, Bourque began working on his sophomore album, Blue Hour, which was released on September 27th. According to Bourque’s bio, “Blue Hour invites you into an exploration of loss and new beginnings through pensive, chic piano-driven pop. [He] presents 11 titles drenched in poetic expression anchored by shining piano melodies, sweeping synthesizers, and blissful orchestral arrangements.”

The recently released title track, “Blue Hour”, graces us as the first track on the album. The catchy melody captures the attention of the audience from the start of the first note on the piano, to the repetition of lyrics towards the end. According to Bourque, this is a track that “examines communication in a relationship and how difficult it is to maintain honesty and sincerity despite being madly in love.”

“Thinking of You” (featuring Jenn Grant on backing vocals) is “about looking back on a failed relationship. But not in a bitter or sad way; it’s a celebration” It is a song “for anyone who has ever spent too much time daydreaming about someone that was important in their life in some way.” This track has a wistful light pop sound that’s laid back and easy to listen to.

“Motherland” showcases some of Bourque’s creativity. The melody has a very big sound created in part by the piano using a wider range of sound. There is a string section that fills in a lot of sonic space on top of the sounds one would normally expect. The use of the sonic space accenting what he was singing kept the audience’s attention, along with specific lines were the instruments brought the volume down to create intensity. Many of these techniques can be found throughout many of the other tracks on the album as well. Bourque continues to creatively use sounds in tracks such as ‘Bonne Nouvelle’ where one is given the feeling of someone walking through a crowded street, complete with conversations around you and what seems to be a tv/radio ad cutting in with a little static. ‘Marit’ takes a similar approach, showcasing a conversation or interview with someone (all spoken in French) and a piano sound that reminded me of wind chimes.  Both short tracks seem to be an interlude to the track that follows.

“Wait & See” (co-written with Dave Monks of the Tokyo Police Club), is a “string-laden, momentous piano ballad that reflects on how anxiety and depression can affect a relationship.” According to Bourque, “this song grew out of the belief that someone you love, or perhaps barely know, has everything under control but, in reality, they don’t of course. We are all struggling together. It’s a song about hope.” It starts off with a quieter, simple piano melody during the verses before bringing more upbeat positive music as he sings about things getting better as the days pass. The use of strings throughout various parts of the track accent the emotions that Bourque is trying to portray throughout the song.

“Matador”, the first track released from the album, has a bit of a different feel than other tracks. It begins with an acoustic guitar before bringing in other sounds. It is a catchy tune that will definitely capture the attention of an audience. Being one of the tracks that stands out the most on the album, there is no surprise that it has been climbing the CBC Music Top 20 Charts!

The album ends with a song entitled “Love Song in C Minor”. The idea behind this track is in the title;  it is a love song even if the melody does want to leave you believing otherwise. This stripped-down, intimate track reminds me of the background music one would see in a movie or on a tv show as the characters are reminiscing about their life together. Another neat addition to this track is the fact that he ends the song repeating chords similar to what he began the album with. It is almost as if we came full circle.

Overall, this is a great album to listen to if you are just looking to unwind or looking for some easy listening. The use of additional instruments throughout to accent the piano and add to the emotional appeal will definitely keep the audience wanting more. According to Bourque,

“Blue Hour is twilight’s shining moment of natural, unwrinkled radiance. A mellow and vibrant hue that casts itself atop of landscapes, skylines and people going about their lives. Blue Hour is an uninhibited reminder to stop and take in what’s beautiful as it happens.”