Half Moon Run debuts track and video for “Favourite Boy” 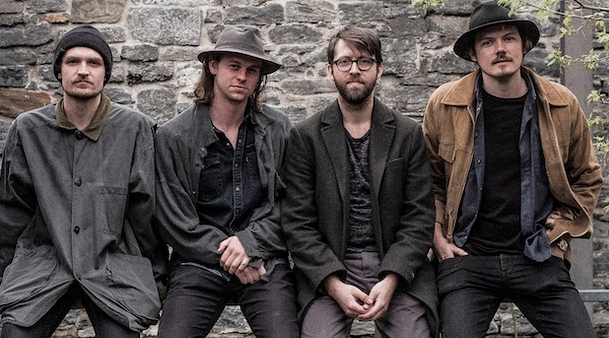 Quebec indie-rock band Half Moon Run have just debuted a third track from their upcoming album A Blemish in the Great Light, which will be out on November 1st. The track, “Favourite Boy,” was shared alongside its official video which was directed by Philippe Grenier and featured many volunteer extras. View the video HERE, or at the bottom of this article!

Dylan Phillips (acoustic drum kits) explained that the song was a bit of a battle:

To figure out the tempo of that song. The first version we did was way too slow; the second version we did was way too fast. We had to figure it out, groove into it, live with the recordings for a while, and then when we went into studio with Joe, we could be like, “We know that the tempo is 133. We’ve tried 131, 132 and 134, with and without click, and we have determined that this is the tempo.” And then Joe said, “Okay, that’s great.”

This new album layers instrumentals, patterns and melodies and merges them together for something that is sure to be an incredible listen. Half Moon Run has just started a large run of tour dates taking them across Canada and overseas—from now until mid-March 2020. $1 from every ticket sold goes to Project Peanut Butter and the treatment of severe acute malnutrition through effective, locally produced and ready-to-use therapeutic foods. Check out all of the tour dates HERE. I’ve had the pleasure of seeing Half Moon Run twice in concert, so I can say from experience that if they’re coming near you, they are not to be missed! Their shows are engaging and interesting and keep you on your toes listening to all the different layers of talent.

The band also has a special Halloween launch show in their hometown of Montreal on October 31st. It will take place at MTelus, and fans are invited to come in a costume and expect a surprise! Unfortunately, tickets for this are already sold out 🙁