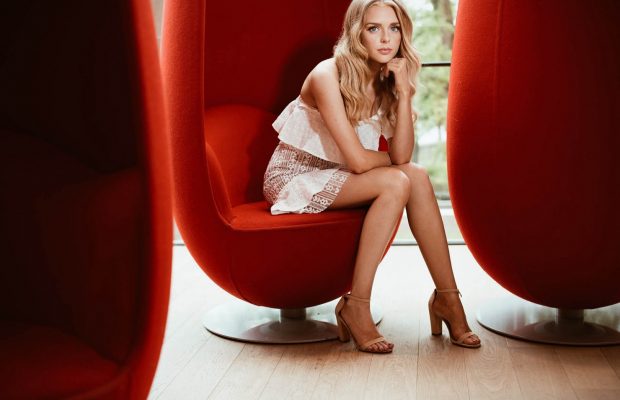 Jordan says of the single,

“The very first time I drove to Nashville to write, my twin brother was driving and telling me about how he loved to drive at night and into the sunrise. From there, the song grew. I wanted to create a happy musical energy that captures the euphoria one feels when you first fall in love and begin experiencing the world together. It’s something you can listen to as you drive along on a warm summer night.”

If you are able to catch Amanda live, here are two of her upcoming shows:

Check out the video below and find out more about Amanda Jordan in our Five Questions With segment.

I’m a Canadian country artist from Smiths Falls, Ontario, but I’ve been living in Nashville since January.

I spend a lot of time songwriting, but I’m also part of the Nashville SongBird Tour Bus as a featured performer and songwriter.

“Driving in the Dark” is my new single, which just hit Canadian radio on September 30th!

Most of my songs are involve storytelling.

In the case of “Driving In the Dark”, it’s just meant to be a fun, energetic song that you can jam to while you drive at night.

The inspiration for it came when I was driving to Nashville with my twin brother Thomas for my first songwriting co-write sessions.

On the drive, he shared how much he enjoyed driving at night and into the sunrise. The song was inspired by that moment.

In Nashville, I wrote with Jason Matthews and Phil Barton on Music Row before we created a working tape for my producer, Jason Barry. Jason is so great! I’m grateful to have these amazing and talented friends be a part of “Driving in the Dark”.

Do you have any upcoming shows? For someone who has yet to see you live, how would you explain your live performance? (Please answer the second question)

In terms of my live performance, I try to engage the crowd as much as possible with my originals. I focus on making the crowd feel emotion in what I’m singing.

Right now I would, of course, suggest “Driving In The Dark”. I’m really proud of this song and it’s just upbeat and fun. Some of my other songs have a heavier storyline with deeper content and they will be on my EP, which I plan on releasing next summer.

I love to support The Girl Power Hour, which was created by Amanda Kingsland in Ottawa, to show radio that you can play female artists back to back and the audience loves it. It’s one of my favourite ways to listen to the great Canadian female talent that we have. My current favourites are Lindsay Ell, Meghan Patrick, Madeline Merlo, Tenille Townes and Tenille Arts!