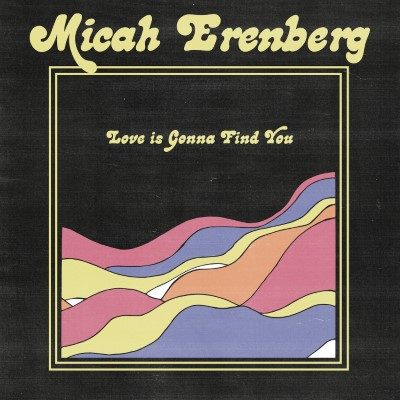 Love Is Gonna Find You is the second album from Matlock, Manitoba based artist, Micah Erenberg.

In the press release, its mentioned that not only was Love is Going to Find You was crafted in several studios between Toronto, Winnipeg, and Micah’s home town, Matlock, Manitoba, it was also made by sifting through over 80 demos, (plus some songs written during the recording). This commitment to producing a well-crafted album truly shows in the final product. Love is Going to Find You really feels like a true labour of love, showcasing not only the breadth of talent of Michah Erenberg but also his heart. Featuring Michah’s brittle tenor, Love is Going to Find You also has electric guitar, classic guitar, synths, drums, synth, sound clips, and layered vocals. The overall effect is a very dreamy, experimental album that shares its genes with classic 70s prog-rock.

Standout tracks on the album for me were “Sunspill” and “What Am I Doing Here”. “Sunspill” uses a backbone of a simple drum line and guitar chords, then builds on top of it ethereal samples, choruses, and a drifting electric guitar. The effect feels makes the song feel grounded yet celestial as the lyrics describe getting stuck in repetitive loops of thoughts: individual thoughts such as unrequited love, to universal thoughts such as social action.

“What Am I Doing Here” uses a preset drum sample as its base to make a bouncy, optimistic-sounding pop song. This contrasts well with the subject of matter where the lyrics darkly, but lightheartedly, question existence given its associated stress. As the lyrics casually say things like, “They call me a lucky man, but I don’t see my friends and family” and “Who said that dying is wrong?” Using a cheerful melody and tone for such depressing subject matter not only makes the lyrics more palatable but gives a resigned ‘oh well’ to remind listeners that though the singer has these thoughts, maybe time and experience will turn them around on it – hope in irony.