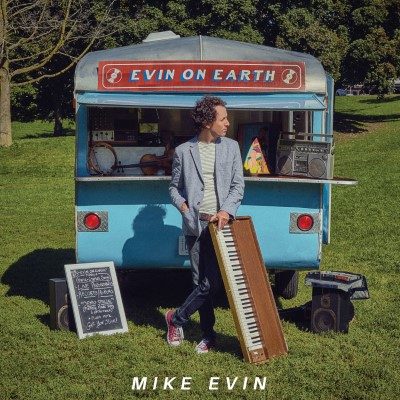 Toronto-based singer-songwriter Mike Evin is back with the release of his sixth full-length album, Evin on Earth. According to his website, “the Canadian piano-pop tunesmith has been steadily building a loyal following across North America and beyond for over ten years, yet his new music has the feel of an artist still out to discover something fresh and honest and connects with a wider audience.”

The album begins with the title track “Evin on Earth”, a catchy tune that will capture the attention of the audience. Being on the shorter side it seems as if it is a little jingle to give a preview of what is to come, similar to what you’d see on a sitcom. According to Evin, “this song is sort of a mission statement, and [the] video [for this track] is a salute to all the musicians I’ve crossed paths with over the years.” (Facebook)

“Girl With A Ghetto Blaster”, Evin’s most recent single, has a 70’s/80’s vibe which is reminiscent of the times when ‘ghetto blaster’ was a term being used. This is a catchy tune that leaves you singing the lyrics ‘girl with a ghetto blaster’ along with the song. According to Evin, “this song was inspired by a real-life encounter with a girl playing music for all to hear. I wanted to sing about the sense of community and connection I long for in this modern world.” Songs such as “Old Language” and “Stronger Apart” follow this trend, leaving you wanting to tap along to the melody.

Showcasing his creatively and broad range of musical influences, “Boring World” is a piano-based track with a solemn feel. This is a track that can easily fit into the easy listening category, probably as background music in a coffee shop. According to Evin, “this song came out of a conversation I had with my dad after I returned from a summer of traveling and spending time in the Anishinaabe community of Manitoulin Island. In my mind, I was fighting to prove that the diverse knowledge we often dismiss from ‘less dominant’ cultures is just as valid as what we’ve learned from European culture.”

Tracks such as “Recovering Romantic” showcase creativity through the use of the keyboard, whereas “Wide Wide World” has a story feel to it, following the paths that life may lead someone on. “Everybody’s Breaking Up” is one of the tracks that Evin claimed helped to kick off the making of the album, which is kind of ironic when the lyrics ‘never lose the romance’ are said to be “a reflection of why he keeps making music.”

The final track on the album, “Little Screen” is a simple piano melody. The heartfelt emotions throughout the track allows the album to end with a feeling of sorrow. It reminds me of something one would hear as an interlude, almost as if it is a sign that Evin just isn’t finished sharing his music with the world. This definitely isn’t the last we’ll hear from him.

According to Evin’s website, “Evin wears his various influences on his sleeve and takes us from theatrical power-pop to Afro-Latin grooves, from electro ska to laid-back beach pop.” Channeling this creativity, Evin has created an album that showcases the piano at the core as his “soulful sound tells the story of the search for love and community.” From the catchy tunes that leave you tapping along to the music to the mellow, soulful sounds that leave you reminiscing, Evin on Earth has a little something for everyone.