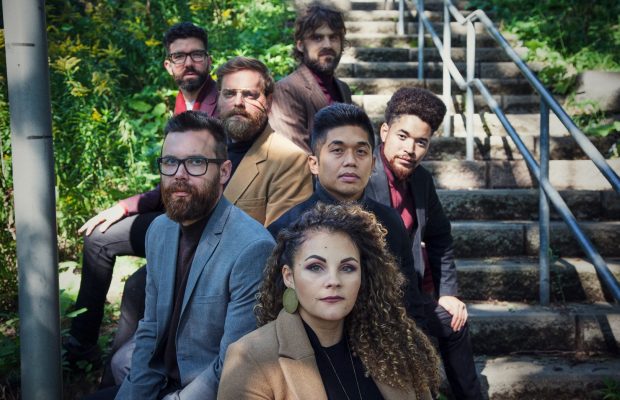 Toronto, ON-based seven-piece ensemble YUKA will be releasing their third full-length album, Dreamscape on October 10, 2019, but here at Canadian Beats, we’re giving you all a sneak peek! The album transports the listener to another place and time, undeniably influenced by the likes of 60’s funk heavyweights James Brown to The Meters.

The album was self-produced and recorded to tape by band members Scott McCannell and Patric McGroary at Magnephonic Records and St. Clarens Studios.

“All the tracks were recorded on tape because we wanted this record to have a bit more of an old school vibe a’la Stax and Motown. No computers were harmed in this recording!” jokes YUKA guitarist and songwriter James Taylor. As for the core creation of each song, Taylor explains the band’s process, “All the songs were either written by myself or Scott, with Claire contributing lyrics. I’ll come up with an idea for a song and the band brings it to life in rehearsal and we settle on an arrangement together. What starts as an individual pursuit, ends up being quite collaborative. It’s great when you can play music with your friends, try to come up with something special, and mostly succeed at it.”

If you’re in Toronto on October 10, stop by The Dakota Tavern and celebrate the release with the band, as well as some special guests.

Check out the album below and find out more about YUKA via our Five Questions With segment.

Toronto soul outfit, YUKA, has been packing dance floors since it’s formation in 2006. Though deeply entrenched in the classic soul sounds of Stax Records (Memphis) and Motown (Detroit), YUKA brings a fresh, contemporary twist to the genre with original repertoire and innovative arrangements of well-known funk and pop standards.

We like to write songs influenced by old soul and RnB records, but they inevitably come out a bit different.  On the new record there’s a bit of everything, a New Orleans groove,  \\a classic soul ballad,  James Brown type funk, a tune with a more modern chord progression.  Something for everyone!

The Dreamscape album release is Oct. 10th at the Dakota Tavern in Toronto! We’re presenting a special 9 piece version of the band to help bring the record to life. It’ll be a fun, energetic, dance party; business as usual for the YUKA troop.

Maybe “Women it’s Time”? The song is more or less a call to action for women to no longer allow their lives to be dictated by societal norms or “the patriarchy” if you will.