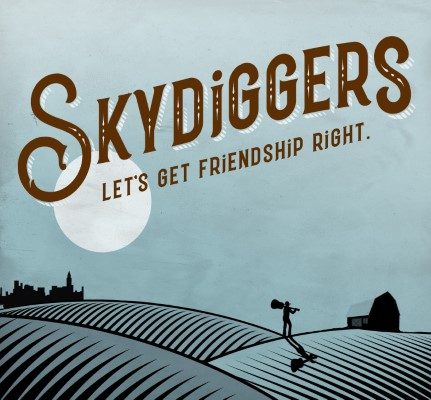 Let’s Get Friendship Right is the newest album from Toronto based band, Skydiggers.

In their press release, Skydiggers says the album was created in response to the recent loss of several friends and family members – specifically to use the power of music to heal in this difficult time. The mood of grief does indeed seem baked into the DNA of each song of Let’s Get Friendship Right, but overall, optimism and hope are the moods of this album. Using slightly horse, hushed male vocals, layered chorus, electric guitar & bass, electronic samples, drum, horns, harmonica, saxophone, Let’s Get Friendship Right is generally a light and hopeful album. Even the name of the album itself ‘Let’s Get Friendship Right’ infers a previous loss, but overriding optimism to try again and be successful.

Standouts on the albums to me were the tracks “Questions of Love” and “Ineligible”. “Questions of Love” is a bouncy departure from the slower rhythm of some of the other tracks of the album, with upbeat, funky guitar riffs, horn, and saxophone solos. This track has incredible energy I would love to dance to at the feet of a Skydigger’s stage. “Ineligible” is almost the polar opposite of “Questions of Love”, though, as the lead singer angrily speaks (not sings) lists of discriminatory legal language for ‘ineligibility’ over the chaotic instrumentation of their full band. This experimental format really helps the listener feel the frustration of being told one is ineligible by reason of race, gender, orientation or religion. This is the only angst-ridden track on Let’s Get Friendship Right and seems a cathartic release for the aforementioned grief that seems to haunt but not override the tone of previous tracks. It’s not a track for dancing, but for anyone who has had condescending language of bureaucracy tell them they were ‘ineligible,’ I think it will resonate heavily.