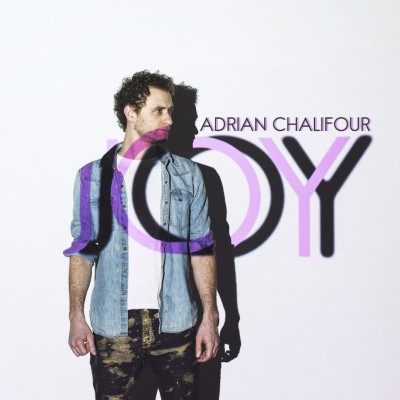 In March 2018, Chalifour made his national TV debut by appearing on The Launch. According to his website, “the appearance marked a new chapter in his career beyond the T&T (Towers and Trees) moniker and fulfilled a promise he made two years ago when he became a father; to do everything possible to show his daughter that gifts are worth honouring and dreams are worth pursuing.” Staying true to this, Chalifour released his solo album JOY on October 4th.

The album begins with the title track “JOY Pt.1”, which captured my attention from the first note. The introduction has a whimsical feeling, almost as if you are floating through past memories and having many key moments brought to the forefront. “JOY Pt. 2″ comes later in the album, cluing up as everything comes full circle.

Many of the tracks strong resemble music from the 80’s era. ‘”The Dark” is a catchy tune, with a beat that makes you want to bop along to the music. Whereas “Feel In The Night”, a quieter, mellower track, leaves the listener swept up in a dream.

“Head Down / Heart Up”, an upbeat track that leaves one bopping to the music, has already won awards. It was the first place winner in the Unsigned Only AAA Category. That’s pretty cool! Keeping with the upbeat theme found throughout the album, “Calling on Love” is a motivational track reminding one that they should never give up on what they want or set out to do.

“Open Heart”, Chalifour’s first solo single, has a little bit of a different tune than the others. It starts off with simple guitar chords and a simple beat on the drums. This will catch the listener’s attention right from the beginning before it breaks into a more upscale jam.

“The Collapse”, Chalifour sophomore single, demonstrates raw emotion that shows a more vulnerable side. According to Chalifour, “this is a song about loss and the helplessness that precedes it. That might mean a lot of different things to different people, and even means different things to me depending when and in what context I listen to it.”

Overall, “JOY is an upbeat, evocative album that’s ready to permeate the Canadian indie-rock scene. From anthemic lyrics and feel-good hooks to the sentimental moments and raw emotions, Chalifour has written a diverse 8-track collection that explores the gamut of experience that comes in discovering joy.” Listening to the album in its entirety was like having your own private concert right in your living room. So what are you waiting for, you need to add this album to your collection right now!