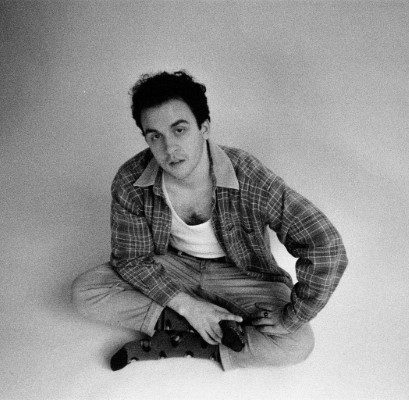 Toronto, ON-based newcomer, nodisco. released his debut pop-infused single, “Thoughts From Your Car” on September 20, 2019. The single is mixed by Chris Zane and mastered by Joe LaPorta.

“This song is lyrically, precisely the moment that I decided what to do with my life. I wrote it during a panic attack that my dear friend Mike Brandolino talked me through. It was during a day that I had a ton of older songs that I wanted to run past him, but none of them felt right. In that moment, I felt like giving up, since I had no prospective opportunities in the music world, no band members, no connections.

The demo was lo-fi, akin to older New Order or Joy Division. There were no vocals. Mike loved it, so we ran with it. I didn’t have lyrics, so the verses became a jangle pop anxiety freestyle. The second half of the second verse, though quickly, explores my re-occurring problems with health anxiety (“if you just believe me, you’ll see I’ve got sick in me”). It was important that the lyrics were honest and direct as possible. At the time, Morrissey was a big influence for me. I just love how on the nose he is with lyricism, I felt like I knew him personally. Much like Morrissey, I tend to write songs like a journal entry, so I thought that balancing direct lyrical honesty with pop-structure would be cool.

All and all, it’s a song about feeling lost, about not knowing what you’re doing with your life; but that’s fine. You’ll find your way. I did.”

Check out the single below and find out more about nodisco. via our Five Questions With segment.

Hi, I’m Chris (or Christopher, whichever you prefer) and my project is called nodisco. I just released my debut single, “Thoughts From Your Car”. I make “pop music” (what that means anymore, I’m not sure).

My record collection includes bossa nova, new jack swing, R&B and post-punk, all of which play a part in my sound. First and foremost, I’m a devout music fan who really just wants to show the world my collection. I love Max Martin’s approach to pop records (breaking sonic boundaries, all within the same record), so I try to use that approach.

No upcoming shows yet, but currently building it. This whole project is still pretty fresh, but rest assured, we will be playing shows in the very near future.

Well, currently there is only one to listen to (haha). But of the many which will come out, the one I’m most excited about is one called “A Call?! For Me?!”. It’s got a ton of new jack swing influence and one of the weirdest, but sickest guitar solos ever.

Oh man. Current bands, I may be biased, but VALLEY is incredible. I can just hear the ambition on their debut record, Maybe, and I love that. I like when I feel like bands or artists are trying to change the world. In terms of Canadian music in general that I’m listening to, Nelly Furtado – Loose is a fantastic record and lots of old Bieber. Oh and some Jann Arden because I love Dawson’s Creek.