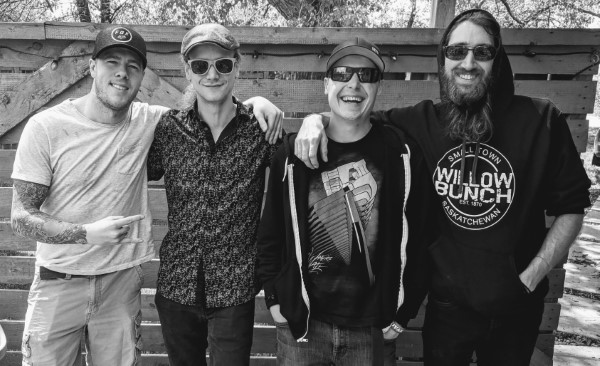 Saskatoon-based band, Cedar Sky is made up of Joshua James Dewey, Cole Jordan, Jesse Kane, and Aaron Hamoki Seaman. The four have released their new single, “Diana” along with a brand new video. The single is off of the band’s upcoming album, Crossing The Rubicon which is set for release on October 17, 2019.

“The song tells the story of a man who falls in love with a woman from his past and he must leave the one he’s with. He wishes he could change but the heart ultimately decides who you love.”

Check out the video below and find out more about Cedar Sky via our Five Questions With segment.

Hello Canadian Beats readers! We are Cedar Sky, A group of 4 amigos all hailing from the Saskatchewan Prairies consisting of singer and rhythm guitar player Joshua James, lead guitar player Jesse Kane, Drummer Cole Jordan, and Bassist Aaron Hamoki Seaman. Josh had started the band back in 2013 with some old bandmates and the rest of the group all met through the Saskatoon music scene. Cole and Jesse had been in a previous band together called Bastard Poetry and knew Josh from some old festivals and shows done together. Aaron has also played in multiple bands in the area including Dr. Booty Quiver and BOOMlag. In 2017 our paths finally crossed and here we are!

Josh: Our music is very diverse as in whatever comes into my mind, that’s what I write about. The overall genre would be described as Rock but depending on the mood I’m in or what inspires the song, it could range from blues to pop, to Latin, to psychedelic. There are a few different ways that these songs get written. One way is after about 40 minutes of straight jamming and noodling around with the guitar and I’ll find a cool riff. Once I have that, I’ll try to write the song around that riff. Sometimes the riff ends up being a vocal melody and I’ll do the whole thing on guitar and then build a chord progression around it and write vocals to fill it in after the fact. The vast majority of the time, I’ll either be driving, relaxing, or simply letting my mind wander (often after an emotional event) and words or a melody will just come into my mind from nowhere. When this happens, I know I need to get it down on paper or a recorder otherwise it will disappear into thin air.

Generally, I hear the whole arrangement i.e. vocals, guitars, drums and try to do my best to remember it for when I have an instrument at my disposal and try to get it down. Sometimes I’ll get a piece of the song like a chorus, an intro or a verse, put it down on paper and then leave it for a day, month, years until I’m back in that place. Other times I hear everything at once and a song can be written from start to end in 10-15 minutes and I know I can call it finished. It really varies and is difficult to describe. The lyrics of the songs are generally based on direct experience in my life, a phrase that jumps out, a story that needs to be told, or just a fun jam that is meant make your head groove. When I write these songs I try to do it in a way that the listener can use them for whatever they need at that point in time if that makes sense.

We’ll be playing in Saskatoon SK on October 25th at Amigos in celebration of the release of our debut LP Crossing the Rubicon. Our show can be described as a roller coaster that starts with a drop right out of the gate to get your heart beating and body moving with grooving guitar riffs and soaring vocals. The high energy moves into harmonizing guitar solos and melodic rhythms that will set up a trance where the music takes you over and you can’t help but feel every emotion you’ve encountered in your life. You’ll feel love, heartache, jealousy, and hope. At the end of the show, the intensity rises to a crescendo and you’ll leave buzzing.

Cole: Solo Flight. There’s plenty of catchy hooks and guitar riffs but Solo Flight is the most personal on this whole album. The other songs are awesome but follow a path of rock and roll. Solo flight is just “you.” I think it’s the most original “Dewey” song and that’s why I have a greater appreciation for it

Cole: The Tragically Hip. The reason? The variety. They are so diverse within their realm and the songs are simply amazing

Josh: I would probably have to say The Guess Who. Burton Cummings is such an amazing singer and the songs themselves are timeless.