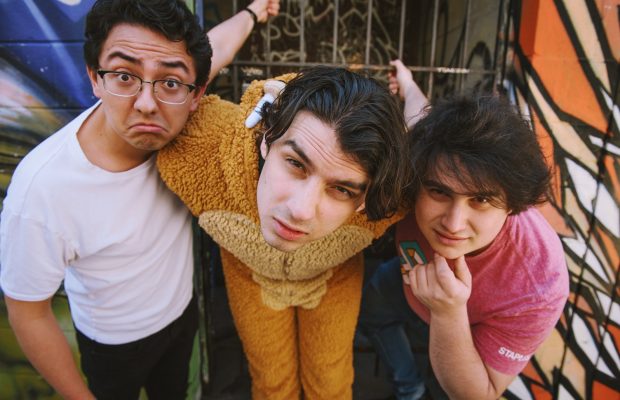 Toronto, ON-based band, Numb Tongues recently released a video for their single, “Naive”. Check out the silly video below and find out more about the band via our Five Questions With segment.

We are Numb Tongues. We’re a quirky Toronto-based band who love to write and play funky music. We call ourselves “the funkiest punk band you’ll ever see”. Our core lineup consists of Jonah Grinberg (lead vocals), Corey Weinberg (drums) and Tristan Lipton (guitar and backing vocals). We have a revolving door of bassists we’ve worked with since ours left the band last year. We also recently started incorporating a DJ into our lineup. He goes by DJ M4RS, and he’s a huge staple of the DJ scene in Toronto. We create original samples that he improvises and scratches live over the band. Jonah started Numb Tongues at the end of high school but was having trouble finding musicians until he met Corey on Facebook and they met for a jam. Corey’s drumming has been essential to our sound since he first joined because there aren’t many drummers alive who can do what he does. Someone once called him “the John Bonham of the Toronto punk scene”. After a couple of lineup changes, Jonah met Tristan through their fathers. The first time Tristan came to practice, he surprised us by bringing a chord chart he had made of all the songs we had written up until that point and played them better than anyone who had been in the band prior. Jonah and M4RS met through our mutual friend Kirsten Sonntag. They both went to the same college, the Harris Institute for audio production. The idea for adding a DJ first came after our former bassist had quit and Jonah had become obsessed with the album “SCIENCE” by Incubus. He had been asking himself for months why no one in the scene was incorporating a DJ into a band lineup and figured he might as well do it himself.

Whenever we try to describe our sound, we often use the terms “funky punk” or “post-funk”. Basically, we’re a funk rock band with a punk rock setup (one guitar, bass, drums, lead vocals) but since we’re all so technically proficient with our instruments, we’re able to cover a lot of sonic ground. It helps allow us to be flexible with genres like jazz, hip hop, ska and post-hardcore to cover a wider sonic palette than most punk bands would be able to. A lot of people compare our sound to Red Hot Chili Peppers but we’ve also gotten comparisons to Maroon 5 (back when they still wrote their own songs), The Police and Cory Wong. A lot of our writing tends to evolve from song ideas Jonah brings in or jams and riffs that we piece together after the fact. Jonah writes all the lyrics and everyone in the band collaborates on the arrangement. Working with M4RS has added a whole other level of possibilities that helps solidify the character of our sound that much more. It also means that the rest of the band has to lock in even tighter because of how rhythmic he is. What helps is that everyone is in agreement that the last thing we’d want is to be a stereotypical, testosterone-filled nu-metal throwback, which helps play into our funk angle that much more. We try to avoid genres like country, folk, blues and hard rock, not because we don’t enjoy our fair share of those genres but because too many people make that kind of music and it wouldn’t feel genuine for us to do it, especially when there is so much of a sonic playground being untapped. It often feels like a lot of people are just listening to the same things, so we try to stand out by being as funky as we can possibly be.

At the moment, we have two shows coming up October 24 at Cherry Colas and November 14 at The Piston as part of Indie Week. Our live show is intensely energetic from the first note. Jonah is as charismatically quirky as they come, not afraid to wear a giant onesie, dance like a goof, start a moshpit or surf the crowd. In other words, there isn’t a single stage big enough to contain him. By the time we’re done a set, all of us are usually sweating buckets and close to passing out. The best is when the audience is fully engaged, dancing, singing along, laughing and having a great time. We live in a crazy world and we try to reflect that but at the same time, we want people to be genuinely having fun. There aren’t enough fun shows nowadays. We take our business and our craft seriously but we let it loose on stage and we’re not afraid to push the envelope.

“Naive” is by far the best-sounding song we’ve put out as a band thus far. It came together really organically. It’s groovy, it’s angsty and the funky bassline slaps like crazy. Tristan actually played the bass on that song so we could avoid paying for a session bassist and he absolutely killed it. Did we mention how talented he is? It’s a fun song to dance to and really helps get people to understand how we sound right now. The music video is a lot of fun to watch too and was a blast to make. We filmed it at The Boat in Kensington Market. What’s cool is also knowing that it’s essentially our first real statement this lineup of the band has made and everything we’ve been working on since is going to keep sounding better and better with each release.

Some of the first Canadian music we all listened to were Barenaked Ladies, Nelly Furtado, and Billy Talent, who we got to see last year at the Strombo house. Since then, we’ve become huge fans of Larnell Lewis, Pocket Dwellers, Daniel Caesar, KC Roberts, Anomalie and Death From Above 1979. It would be a huge dream come true to open up for bands like illScarlett, PUP, Sumo Cyco and Busty and the Bass. And we are all in agreement that Alanis Morissette’s “Jagged Little Pill” is one of the greatest albums ever made.