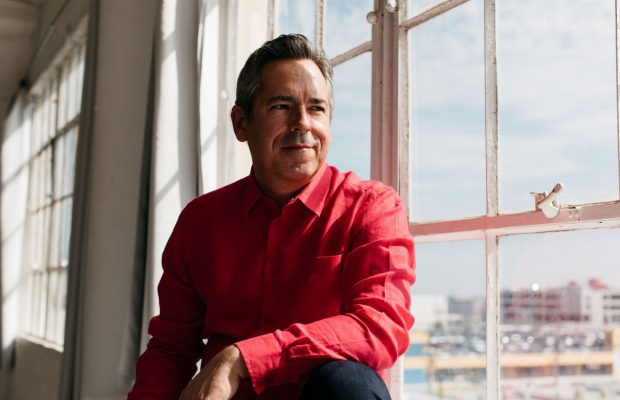 “I’ve always loved the word,” the Los Angeles-based singer, songwriter and actor says. “There’s something about it that appeals to the romantic in me. That the concept of ‘aching to get away so badly’ has its own word… and, not just any word, but a portmanteau that attaches the passion of ‘lust’ to it all. I’m not a linguist, but as a musician… this strikes me as pretty fertile ground to explore.”

The single is from his upcoming album of the same name, which is set for release on October 18, 2019. You can pre-order the release HERE.

Check out the video below and find out more about Blaine via our Five Questions With segment.

When I first got into all of this I had no idea what I was doing or why, lol. When I met my producer and co-writer for the first time I showed up on his doorstep with a stack of music and said, ‘I just want to sing’ and so I guess that’s about as good an introduction as any I can think of about myself. Singing is my life and performing and writing are my lifelines. I’ve come to this realization later in life, which is sort of like discovering something that has been in plain sight all along. Now I just cannot imagine my life any other
way.

The turning point for me was definitely my decision to move to Los Angeles in 2017. This was the catalyst for change I needed at a time when my life was so established and safe. It was an opportunity to walk away from all the distractions, responsibilities and excuses I had amassed over time, and against all rational logic I jumped at it.

Once I had walked away from that I was finally able to take a long hard look at what really mattered and this turned out to be music. It was a ‘light bulb over the head’ moment. Going through piles of old papers I found poems and song lyrics I  had been writing all my life, some going back to childhood (one of them is on my coming album in my new French version of Summer Wind, Le Vent d’ete). It was obvious that this is what I’d always been meant to do. Waiting on my green card provided the perfect opportunity and the rest fell into place…though in one sense ‘falling into
place’ does sort of belie the exhausting work and endless difficult choices and sacrifices it takes, in another sense it does capture a deeper feeling that despite the challenges fate is sort of guiding the way. However, you want to describe it I’ve trusted in it and I’ve followed my vision and instincts every step of the way. The end result is my first album, which brings me here now to this happy moment when I get to share it with the world and with your readers.

I love artists who blend styles and mix genres. I was so inspired by this idea on Wanderlust and so now I put myself squarely in this category and hope to explore it further in future projects. The constants for me will always be a strong melodic line and a strong lyric. I was raised on the traditions of jazz, musical theatre, and the great American songbook. I love music that tells a story, whether it’s a simple anecdote or a heart-wrenching tale about humanity. When the story and the music and the performance all connect it is unbelievably powerful.

I’d say this is why I love working with songbooks. On the one hand, there is already an amazing story to tell in these works, from Leonard Cohen to Cole Porter as examples – masterful writers and poets and then some because they were musicians too, and the writing had to be in service of the music. On the other hand, the songbooks give us so much material to play with and to reinterpret. I feel if you’re  going to revisit something classic at least have something
original to say about it, and this is half the fun.

For my own music, I find that inspirations can come in the most unexpected ways. It can be as simple as a word, as it was for Wanderlust cause I’ve always loved the word. Or it can be an idea or image that I want to flesh out. For me, it always starts with the lyric and story, along with a concept of the feel or vibe I want to develop. Until recently I’ve always worked with someone to develop melody based on the ideas I’ve brought forth. Just recently though I have been playing around with melody too and have some material I’m very excited about. However, this may turn out I believe I’ll always need a good arranger to work with. I know in my heart that I’m a lyricist first and foremost, which suits me fine because I love the creative collaboration of songwriting and I’d miss that working on my own. Each project and each piece is different though and in the end, you go with the flow or method that presents itself.

Having just finished the album and finished shooting the videos we finally have a moment to breathe and start looking to plan some shows. It seems fitting that we’d be kicking off in late October in Toronto and Hamilton and around the GTA, my old stomping grounds. I’m in discussions right now and hope to make some announcements soon. Can’t wait to get out and see everyone!

In a word: Lush! I love big sound and smooth rich vocals, and I want an audience to swoon when they hear the music. Wanderlust is romantic and ultimately joyful. This is what I want to impart to my audience. I want people to forget about their troubles, to forget about grey skies and bills to pay, and I want to transport them, if only for a couple of hours. This is what Wanderlust is right? It’s a yearning to escape. My band sets just the right mood. It is soulful and jazzy, and even a touch orchestral in spirit (without the orchestra obviously lol). It is a smart and sophisticated presentation that will make for a beautiful evening, one we hope will leave people floating on air afterward.

I guess right now I’d have to say my song Wanderlust. It’s one of two original songs on the coming album. I love them both. Wanderlust starts the journey of the album off and the
other one brings it home sweetly. They are bookends really. I’m interested though how Wanderlust seems to connect to people in different ways but in all ways good. I love hearing reactions to it, and I love hearing how experiential the song is proving to be for people, that they love to pour a glass of wine and start the weekend off listening to it, or they play it on their earbuds when they’re at the beach, or it’s on their playlist at cocktail hour, etc., etc. I love that my music, and that this song, in particular, has found its way into peoples hearts and into the lives they are living. I’ll take that!

It’s no easy task for me to pinpoint a favorite Canadian artist, I mean the musical landscape of the nation is just so vast, its resources so rich. If I’m pressured to answer though I’d have to say it’d be KD Lang. I’ve been a dedicated fan of hers since the moment I watched her own the Juno stage in a wedding dress and work boots back in 1985. Over the years all of Canada came to embrace her, then the US, then the world… and then at a pivotal point in her career, she came out. She laid it all on the line at a time when doing so could have been a deal-breaker. As it happens though talent like hers wins out, it knows no borders or boundaries, and the rest, as they say, is history.

And what talent she has! I’ve never stopped being amazed and re-engaged by her artistry, by her ability to reinvent herself, and by her insistence on defying the confines of musical genres. From ‘cowpunk’ to ‘Miss Chatelaine’ KD pays homage to her inspirations, all the while subverting them and creating something fresh in the process. It’s never a gimmick though, it’s always the real deal and she has given us so many performances over the years that are nothing short of iconic; delivering Cohen’s ‘Hallelujah’ at the Vancouver Olympics springs to mind as a national ‘moment’, ‘Three Cigarettes in an Ashtray’ on the old Johnny Carson show, or her duet on ‘Crying’ with Roy Orbison… among so many others.

There are just so many great Canadian artists though. I guess I tend to gravitate towards the torch singers and troubadours. I have literally everything Diana Krall has ever recorded and I’ve seen her live multiple times. I’m a huge fan of Molly Johnson, Renee Olstead, Rufus Wainwright and Ron Sexsmith to name a few… but I also love ‘feel good’ music, dance, pop and country. I’m bopping around these days to ‘Long Live the Night’ by the Reklaws and have ‘Wasting Time’ by Calpurnia and ‘Fascination’ by The Beaches on playlists at the moment. As a Canadian, I’ve always got my ears open for Canadian artists and I never miss the Junos every year… oh and I’m obsessing over Schitts Creek right now which I know is not music but it’s all part of the same wonderful, creative ball of wax that is the Canadian arts scene I guess, lol.