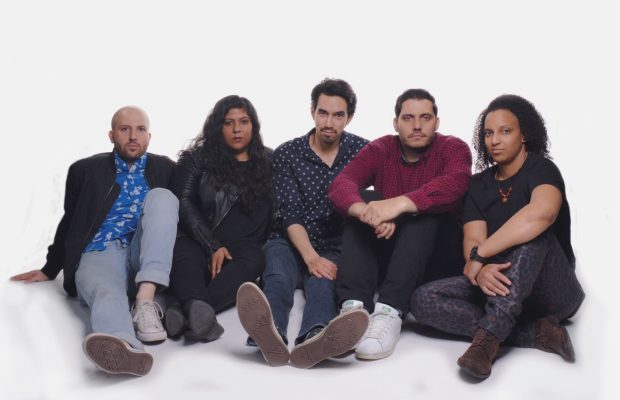 The tracks on the album both musically and thematically capture the ebb and flow of our daily existence.

“We’re all just trying to survive the obstacles that life throws at us,” says the quintet’s singer and lyricist Michelle Mondesir. “Survivor speaks to the human condition, weather it is life’s highs or its lows.”

The band will be playing their album release show tonight at The Hideout in Toronto, and making an appearance on Global’s The Morning Show on September 23 to perform “Kapow”.

Hello Canadian Beats! Thanks so much for having us. We’re a five-piece alt-pop and indie rock band based in Toronto. Our name comes from a character in a David Foster Wallace book called Infinite Jest. One of the characters in the book, Joelle Van Dyne, goes by the moniker of Madame Psychosis. We loved the name so we adopted it as ours.

What else can we tell you about us? How we met was serendipitous and very unlikely. The band started at a wedding, where a mutual friend of some of the eventual band members suggested we get together to jam. At the time we all thought, “sure, why not?” thinking it was unlikely to actually happen. Well, she followed up, and it resulted in a jam session that ultimately led to the formation of the band.

We tend to say our music sounds like a cross between Black Keys and Alabama Shakes or in other words a combination of indie rock and alt-pop. Several people have also mentioned similarities to Metric and Yeah, Yeah, Yeahs. We’ll take this as a compliment!

In terms of our writing style, it has been consistent since the inception of the band. Our guitar player Bret will come to the group with an idea or chord progression. We’ll jam to it together as a full band, developing the structure and transitions over several weeks and sometimes months, while each band member further develops their own parts away from the band. Once we have a solid concept for a song, Michelle will work on the lyrics and develop a vocal melody. Hearing the vocals for the first time is a very welcome change because at this point we’ve probably been playing the instrumental for quite some time. We’ll continue developing the song, adding solos and other parts as time goes on.

We maintained this approach on our new album, Survivor, but with a few exceptions. For example, Michelle wrote the piano and organ parts for a few of the tracks. This is new for us. There’s also a song on the new album called “Not Supposed To Be Here” that Rene initially developed and introduced to us. We can’t wait for people to hear the new songs!

We’re in the middle of confirming our dates for the Fall and Winter, but we do have a big show scheduled at The Mod Club on Wednesday, November 13th as part of the RAW Toronto STELLAR showcase. We’re very excited to be hitting the stage at such an iconic venue. So many great artists have performed there. Stay tuned for more show announcements on our website.

In terms of our live performance, if you’re a fan of catchy alt-pop and indie rock we invite you to check us out at one of our gigs. We’d love to see your beautiful faces at one of our live shows. You can expect a musical journey that encompasses fun and upbeat bangers, and darker, more melodic numbers. We’ll also throw in a popular cover or two. We want to present variety in terms of our song catalogue and the genres we perform. We always say there is at least one song for every person watching during our set. We promise you’ll have a good time.

This is a tough question, but If you really only had time to check out one song from our entire catalogue, the majority of us would say “Kapow”, which is on our new album. It’s a fun and infectious track with a great groove and sing-along lyrics. It just seems to resonate with people regardless of their musical tastes. “Kapow” really captures the energy that the band can collectively create.

I hope this isn’t cheating, but “Survivor” is also a track we’d recommend. It captures a range of emotions, is gritty, yet uplifting, and fundamentally underscores the primary theme of the new album: how to survive life’s obstacles. It is not a coincidence that it’s the album’s title track.

Where do we start? There is such a thriving music scene in Canada and we’re not just talking about Drake. We each come from a different musical background so our collective musical tastes are very eclectic. We’re influenced by all genres and listen to bands at all levels, whether they are indie or on a major label. Here’s a select list of our current faves hailing from Canada, in no particular order: Basia Bulat, Operators, Alvvays, Joel Plasket, Arcade Fire, Daniel Caesar, Charlotte Day Wilson, Haviah Mighty, TRP.P, Metric, Alexisonfire. Tokyo Police Club, Tegan and Sara, Jeremie Albino, Kaytranada, Badbadnotgood…the list really does go on. A big thank you to music sites like Canadian Beats for supporting our homegrown talent!