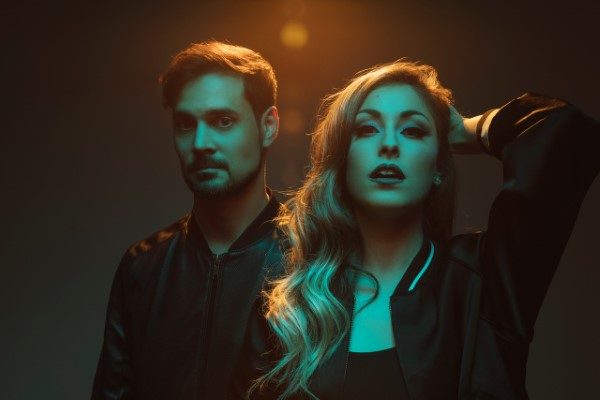 Electro-pop duo Featurette just released a new single, “Don’t Know Me Without You” and we had a chance to catch up with the group to ask them a few questions.

First off, can you introduce yourself and the band to our readers?

Lexie Jay – Hey guys! We’re Lexie and Jon from FEATURETTE – we’re an electro-pop duo from Toronto and we love to make dark and twisty music. Lex sings and plays keys in the band, and Jon plays drums, keys and pads. We’re both from Toronto and have been playing music in different forms for most of our lives!

“Don’t Know Me Without You” was released to all streaming services on September 6th. What can you tell us about that song?

LJ – DKMWY is an introspective look into the duality of spirit that makes up our whole self. There’s a darkness in all of us that fights with the light, and sometimes it’s the force that wins. DKMWY is a look into that darkness, which push and pull us into situations and circumstance that can be outside our comfort zone. We chase those feelings down and obsess over them, trying to find the root of why we’re feeling or acting a certain way, often targeting the darkness as an intruder in our self. In the end, that darkness was always a part of ourselves. Without the darkness, there is no light. There’s beauty in contrast, there’s power in silence. We tried to portray these sonic qualities and packs a punch, paired with a dark and twisty chorus. We so hope you like it!! We’ve got a super cinematic music video coming out soon which visually shows of that yin and yang I’m singing about.

CRAVE, your debut album came out in 2016. Are there plans for a follow-up coming soon?

LJ – Heck yes! In May we came out with “Million Things”, our first single off our upcoming album, and on September 6th we follow up with our second single “DKMWY”, and we’re hoping to drop one more before releasing our sophomore album in January 2020 – we’re so excited!

You are based in Toronto but are influenced by the sounds coming from Northern Europe and New Zealand. Can you tell us how you came to find yourselves working on that type of music?

Jon Fedorsen – I went away to New Zealand in 2012 to visit my brother who had just moved there. I always love to build new playlists for trips to give the trip a ‘soundtrack’ if you will, and typically ask friends for input – what they’re listening to and all that. The playlist for this trip had a lot of really cool stuff on it and really reflected the cinematic mountains and oceans of New Zealand. It was pretty spectacular. It got me thinking about those sounds that we hadn’t really explored as much in Canada, and I wanted to bring them home with me. Eventually, that would develop into the project that I called ‘FEATURETTE’ with Lex and I.

LJ – First up we’ve got a video in the bag for “DKMWY” which we’re SUPER excited to release. It’s directed by Ian Macmillan and it’s a badass motorcycle car chase with a twist. I’m on a rooftop parkade overlooking downtown Toronto, and I get to drive a Porsche and a motorcycle… I mean come on! Our last video for “Million Things” was directed by Ian as well so if you’ve seen that one, you know it’s going to be something special. We’re also going to be on a fall tour with Toronto act For Esmé (PLEASE check them out if you haven’t already she’s a dream) in early October, followed by a hometown show with Courage My Love, Hot Lips and Joan Smith at The Rec Room, which is supporting breast cancer awareness through Rethink Breast Cancer (Oct 18th – get your tix!). It’s going to be a fantastic night. After that, we’ve got another single ready to go, and then we’re releasing our sophomore album in Jan 2020 – going to be action-packed!!

Since we’re all about Canadian music, who are some of your favourite Canadian acts?

LJ – We’ve said it before and we’ll say it again, Dear Rouge are just babes and we love them, and on our recent trip to Vancouver we hung out with Blonde Diamond and Tourist Company, both fantastic acts with really great sounds going on! Most recently we’ve even jamming to Little Destroyer also from Van – there’s so much good stuff happening right now! Canada’s taking over 😉

Thanks so much for chatting with us guys! It was an absolute pleasure <3 Can’t wait to share the upcoming vid with you!!