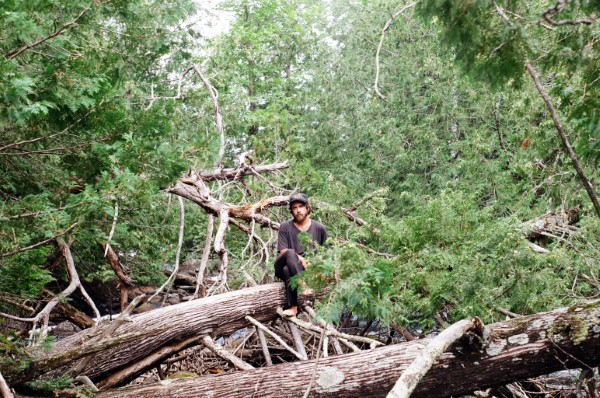 We caught up with wrecker (aka Jory Strachan) for our newest segment of Five Questions With. The track “Passenger Party” from the EP, Homewrecker that was a collaborative split with Manitoban songwriter, Bailee Woods of housepanther. Check out the video for “Passenger Party” below and keep up to date with him via his socials.

That’s always a tough question to answer. I don’t think my music necessarily belongs to the “singer-songwriter” genre but I guess does fit the common narrative of roaming songwriter. I haven’t really had much of a permanent address for the past couple years and don’t see myself having one long-term anytime soon.
A lot of my music is reminiscent of the kind of punk-derivative rock (I suppose you could call it) that I played for many years with 1971 and Rust Owl. But there definitely are a lot of folk/country-ish songs I’ve written and play mostly when I’m playing solo.

I’ll be playing a set at Hoot Owl Festival in the Sandilands of Manitoba Sept. 1st weekend and then a short tour with my band of hometown friends “the Reconstruction Crew” out to OH!NO Fest in Leeburn, ON. Going to play a couple of Neil Young songs at a tribute show in Montreal on September 22nd, then, of course, joining Housepanther (Bailee Woods) and Cold Tea (Vale Abbott) for DevilDuck Records’ Youngbloods Tour in and around Ontario and Quebec.

The solo set and the set with the Reconstruction Crew are very different shows. The full band set is much louder than myself and an acoustic guitar.

I haven’t released much music so far, just the homewrecker split with housepanther and an alternate version of the song “Passenger Party”, so I’d have to say that song. I know it’s cliché to say, but It’s a very personal song. The only way I’ve ever really been able to properly define the way I see the world. I guess pragmatically speaking it’s the best choice too since there are two versions (if you wanna take a quantitative approach to music consumption, there are options).

I’ve been listening to Tang’s last album “Super Happy” quite a bit lately. Really great slow-core music that leaves you in more of a meditative state than just encouraging sadness. Almost reminiscent of the Buddhist approach to sorrow and the peaceful acceptance of it, or the ‘joy hidden in sorrow’.

Some tree planting friends turned me onto this songwriter named Jae Holdsworth and I’ve been really digging his last two albums.

Mama’s Broke has been a staple for a while now. Incredibly talented duo. Same with Slow Spirit from Manitoba. Staples of excellence.

Lastly, “Aging Recycling Plant” by Richard Laviolette & the Hollow Hooves is one of the most important albums I’ve ever heard. It is such a beautiful album that tackles a lot of political issues with such a personal approach.