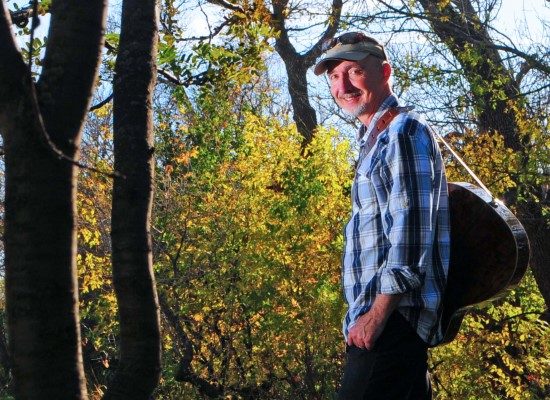 We caught up with Regina-based singer-songwriter, Glenn Sutter who will be releasing his fourth album, In Rivertime on Thursday, September 19, 2019. He will celebrate the release with a full band concert at The Artesian, advance tickets are $15 for all ages ($20 at the door), and available here.

Get a first listen below, and find out more about Glenn via our Five Questions With segment.

Sure thing! Thanks to a wonderful piece that CB did around the launch of my 2015 release “Let the Dog Run,” some readers may already know me as an experienced, Regina-based folk-rocker who has 4 albums to his credit and another on the way. I grew up in a small Manitoba town (Souris) and have lived most of my life on the prairies, except for a brief stint in Ottawa. Nature has always been a big influence on me, partly because I spent so much of my youth playing in, around, and on the Souris River. I explored my passion for nature at university, eventually earning a Ph.D. in biology, and it continues to be the focus of my work at the Royal Saskatchewan Museum. I have always been a musician though, and recently brought music into my museum work by starting unique research and outdoor education program called “Songwriting for Nature.”

As a professional biologist, you can imagine how thrilled I was back in 2010 when my song “Weight of the World” was chosen to be the Saskatchewan track on David Suzuki Playlist for the Planet! This brought my worlds together is a very exciting way and still stands as a wonderful highlight in my musical career.

I started piano when I was 4 and had parents who were happy to support me when I showed an interest in learning violin, guitar, trumpet, French horn, even drums! I would occasionally write songs as well but only started focusing on songwriting about 10 years ago. Since then, I’ve released a live album – a joint project with Brett Dolter (Library Voices, B.D. Willoughby) and 4 full-length studio albums of original folk-rock, including my latest CD “In Rivertime.”

Like John Lennon, Greg Keelor, Sheryl Crow, and other songwriters who inspire me, I try to create guitar and piano music that has an edge to it. Sometimes this comes from a rhythmic feature or melodic hook; sometimes it has to do with phrasing or the nuances of a lyric, especially if the song tells a story. Two of these approaches show up in the first single from my new album, a reflection on The Secret Path by Gord Downie and Jeff Lemire called “Mind on Fire.” The song’s rhythm comes from a repetitive pulse between the sweetness of a major 5th and the dissonance of a flat 5th, while lines like “the young spark fades, no chance to grow” underscores how Chanie Wenjack’s attempt to run away from a residential school came to a tragic end. I’ve been told a few times that the song “sounds like The Hip,” which I take as high and humbling praise.

Another feature of my music is the diversity of styles that show up. A number of my songs on my new album are straight-ahead rockers (Crazy Game), but my catalogue also includes tender love songs on finger-style guitar (Wait), jazzy piano tunes (Tiny Devils), sweeping piano ballads (Twilight), and even some bluegrass (Touch of Love).

Yes, in addition to the cd launch in Regina on Sep 19, I’ll be touring close to home through the fall and winter, doing the “weekend warrior” thing to play shows in Gravelbourg, Moose Jaw, Saskatoon, Fort Qu’Appelle, as well as shows in Winnipeg and Souris. If these shows are anything like the ones I’ve done in the past, they’ll be a satisfying and intimate mix of energy, humour, and prairie-infused stories, with a few sing-alongs thrown in.

I would encourage people to check out “Mind on Fire,” partly to draw attention to my new album, but also because it draws attention back to an important chapter in the history of our country and showcases some of my strengths as a musician and songwriter.