Five Questions With The Monotymes 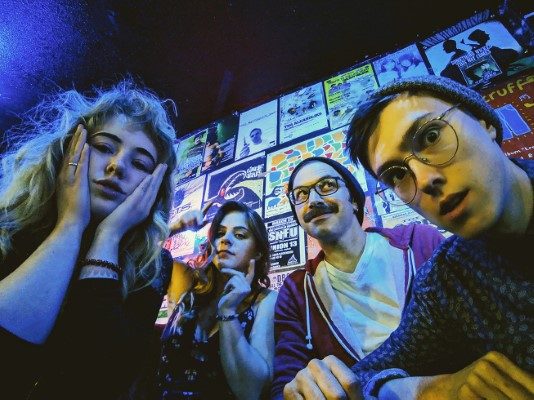 Fruity and freaky! Spooky and spicy! Sweet and savoury! We are the MONOTYMES!!!

We are a group of 4 free individuals making music that brings people together in Ottawa’s local alternative scene. Bri (vox, keys, rhythm guitar) and Adam (vox, lead guitar) met on residence at Carleton University and quickly formed a musical bond. In late 2016, inspired by the uninhibited musical expression and tight-knit community of the Ottawa music scene, they decided to make their own band with absolutely no expectations. Alex (bass, vox) was recruited and the Monotymes were born! It was only a few months before Andrew (drummer and Ottawa music scene veteran) joined the band after seeing one of their early performances. Today we are bolder than ever, playing shows all over Ottawa and southern Ontario, recording music, making new friends, and sharing countless magical moments we never thought were possible when starting out <3.

We are basically indie-rock but honestly, you could probably call it a lot of things. Whatever you label it though, our music features crisp guitars, infectious synth melodies, driving rhythms, and enchanting vocal harmonies.

Our songwriting process has always been undefined, and quite frankly unconcerned about genre. We just write what we feel, whatever that may be. A Monotymes song can be a heartfelt indie-rock ballad, but it can also be a jangle-pop earworm. This mixed-bag quality of our repertoire keeps things fresh and is only enhanced by the distinct writing styles of lead vocalists Adam and Bri. No matter the style though, our songs are kinda like the bubblegum under your shoe; they stick with you!

Yes! Long-standing and widely respected pop-punks The Creeps are celebrating their 20th anniversary as a band and we’ll be kickstarting the festivities October 19th @ Club Saw in Ottawa.

We hope that a live show with us is an intimate yet exhilarating experience! When we play live, we will pump you up, soothe your soul, and mesmerize you! Our biggest hope for our live shows is to bring positive energy to our listeners and foster a sense of fun, community, and inclusion. We love it when people sing and dance along, feeding off of our energy. If our live set can make you dance, or smile, wonder, or lose yourself in any way, then we have done our job.

Listen to ‘Monica’! This song quickly became one of our biggest live hits after its debut in late 2018, and a recorded version was released along with our single ‘Halloween 1813’ in May 2019.

Chronicling the pains of a shitty tinder hookup (look, we’ve all been there), ‘Monica’ draws you in with mellow guitars, an absolutely sexy bassline, clever heartfelt verses, warm vocal harmonies, and a damn-catchy chorus you’ll want to sing along with! What’s not to love???

We’ve got to shoutout our some of the amazing local bands we’ve had the chance to play with!