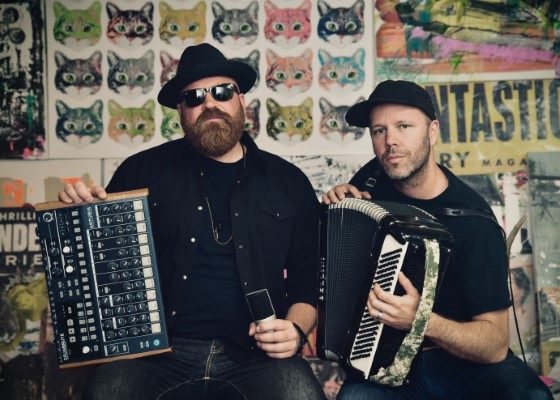 Calgary, AB-based indie alt outfit, Tetrix is made up of Connor Gottfried and Neil Pockett. The duo has unveiled their new single, “Every House Has a Light On” from their album of the same name.

Gottfried shares on their style,

“Think ‘Hank Williams on acid’ or ‘melted accordion Kraftwerk. For this album, we wanted to connect vintage country chord progressions and accordion with analog drum machines and avant-garde editing.”

Check out the video below and find out more about Tetrix via our Five Questions With segment.

We’re TETRIX (Neil Pockett and Connor Gottfried), we’re from Calgary, and we’re bringing the accordion into the 21st century 🙂

We started out as small-town skate-punks back in the 90s and then, after moving to Calgary, we transitioned through jazz, psychedelic, hip-hop, experimental and electronic music.  We were always into improvising and experimenting with different instruments and a few years ago we inherited a vintage Italian accordion.  We fell in love with the sound and have worked it in with Pockett’s amazing analog beats and twisted vocals.  All of our songs are recorded in fully-improvised 30-minute sessions and then edited using Ableton Live down to the final versions you hear on the album.  For this release (our 17th full-length album), we wanted to connect vintage country chord progressions with modern electronic music.  Both Neil and I were born and raised in the prairies and this album fuses that influence back into the progressive sounds we’ve been working with for the last 20 years.

For our live show, we combine improvised performances with a custom-built LED/laser/smoke show that the audience views through psychedelic fireworks glasses.  It’s a trip!  We’ve taken it on the road to Europe where we played a bombed-out art gallery in East Berlin.  No performances currently planned though – we’ve been spending our time in the studio writing and recording.

Check out “Every House Has a Light On” from our new album.  It captures a fresh interplay between old and new.

We love Canadian music – it’s an amazing scene and we’re proud to be a part of it 🙂 Some of our favorites include Tim Hecker, Astral Swans, The Weakerthans, Snotty Nose Rez Kids, and Stompin Tom Connors.