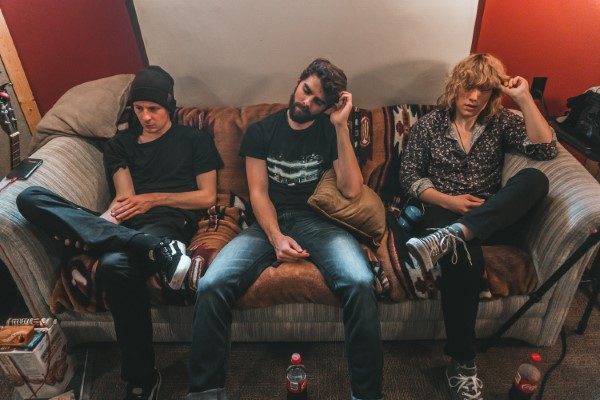 Saskatchewan’s Alien to the Ignorant has unveiled their new single, “Spooky Mulder”. The single features art by Shane Connery Volk (vocalist from One Bad Son). The track also makes reference to the classic ’90s show, The X-Files. The single is from the band’s upcoming EP, Proteus II stated for digital and physical release on October 4, 2019.

Swade: We are Alien to the Ignorant and we play post-hardcore, hardcore, and math rock in a province dominated by everything but. We come from Saskatoon, Prince Albert, and the small town of Delisle.

Myk: We are Alien to the Ignorant, and we’re based out of Saskatoon, Saskatchewan, the most fun province name in North America.

Swade: Our music is sometimes heavy and sometimes the polar opposite. At the moment, we’re navigating “our sound” and trying different things across sub-genres of punk and metal. We can go from soft ballads with clean guitars to progressive hardcore without much warning. When it comes to writing, most often I write riffs upon riffs until something just rolls into another and I have several parts of a song. Most often lyrics come second, and the rest of the band joins in from there, offering new ideas and potential modifications.

Myk: Our music fully embraces the punk of the ’00s. From the somewhat whiny-pop sound of Senses Fail to hardcore, complex pieces reminiscent of the Fall of Troy. Our childhood musical tastes feed what we write.

Andrew: I grew up playing in Church and a family jazz trio, but grew up listening to POD, Dream Theater, and U2 but a lot of PS2 Game soundtracks like guitar hero, tony hawk proskater 3, burnout 3, Disney skate, and quite a few Need for Speed Games too. going into the studio with the material I’m into now, I didn’t really know what to expect but I started listening to vans warped tour compilation records and plenty of billy talent, fall of troy, senses fail and chon which this band is heavily influenced by.

Swade: Yes! We’re playing for the first time in Winnipeg this Thanksgiving weekend as part of “The Pizza-Only Tour,” where we eat nothing but pizza the entire time on the road. Another tour for November is currently in the works. Our live performances tend to be high energy, with an odd mixture of Weezer covers thrown into the vat of hardcore and pop-punk mayhem. They’re also very loud.

Andrew: As far as first-timers for our shows, we are a bit loud and we mostly try to bring out a good crowd involved performance.

Swade: It depends so much on where you are, be it a metal show or on the street. But I’d say our track “Proteus” has a little something for everyone.

Myk: Smile and Nod is my favourite from Alien to the Ignorant’s catalogue because it tells you what we are in a song: it’s heavy, and pop-punk. It’s easily approachable, without being a song that says “baby” too much.

Andrew: I have been digging a lot of stuff off of our next EP but for this first phase with these boys, our first single is the one I’m most proud of for its simplistic hook line and sinker with a smidge of a 5/4 odd time signature in the primary verses.

Swade: Billy Talent and Sum 41 are huge for me for bigger bands, as well as Like Pacific, but at the more local level, I love Surf Dads, Close Talker, and a band we just met on tour called Good Nitrogen.

Myk: I wouldn’t be doing what I am today without Canadian bands like Cancer Bats, Billy Talent, the Trews and Sloan in my life. These bands were what made me actually pick up an instrument, not just listen.

Andrew: Actually it has been a lot of bands I’ve been playing with and became friends with over my 8 months with ATTI. So bands such as Rarity, Calling All Captains, Romancer, and Ugly Again. I’m also a big fan of Surf Dads whom I have known since its genesis with my buddy Chris Dimas who was living in LA at the time, and Priestess from Quebec, which I’m heavily influenced from when they released their record “Master” back in 2006 (?). Those have been my go-to Canadian Bands for quite a while now.