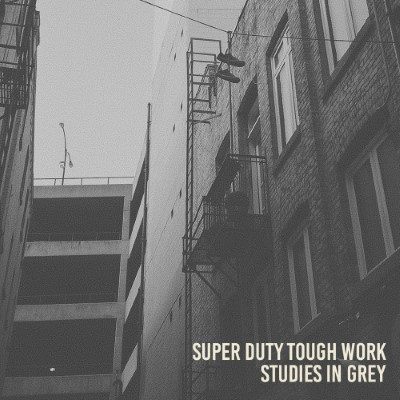 Over the past few years, Super Duty Tough Work has brought a whole new energy to the art of performance, yet have only released a few singles…until now. The group is proud to finally release their debut EP, Studies in Grey; a collection of eight original tracks set to hit the Canadian music scene like the multi-genre tornado that it is.

What a wild ride of genres you take the listener on! Has it always been this way since forming a few years back or a sound that’s evolved?

I’d say the sound has been pretty consistent. The goal has always been to cover a lot of ground, generally speaking, at least within the worlds that we’re actually connected to (of hip hop and jazz mainly).

With the record, we wanted to have a group of songs that were all relatively different, but still cohesive, and hopefully take the listener on a journey of sorts. Some of the tunes are up-tempo, some slower. Some are heavy on the lyrics, others are instrumental. Majority of the tracks are live instruments, but at the same time, we did use some sampling and production elements. We are a versatile group and just wanted to showcase that on the record.

Do you ever find it tough with so many members in the group?

It can at times be challenging, coordinating so many people. Generally, everyone is accommodating and we make it work. It definitely isn’t amazing when it comes to touring and the like. Limited space and costs, unfortunately, are the reality of traveling with such a huge group. But I mean, we’re a big band and that’s just what it is, so we gotta make it work.

What are you most looking forward to with the release of your debut album, “Studies in Grey”?

We’re looking forward to finally letting people hear this record. It’s been in the works for a year and half, at least. That’s just the recording and mixing and all that. So, we’re just looking forward to putting it out, and having it behind us, and basically being able to move on to writing new music. This is our first release, so we’re curious to see how it goes over, obviously. There’s a lot of subject matter covered that, maybe isn’t always what we hear, so we’re curious as to what people think.

With your upcoming tour dates, what do you always hope to leave the audience with at the end?

I mean, we’re a live-show based band. We’ve been playing shows for years, without any recorded music, so that’s kind of where we thrive. I mean, our goal is to just give the crowd a dope hip hop show. One that resonates with older, more purist oriented heads, while at the same time engaging the younger, newer fans of the music, and everyone in between We try to take audiences on a journey, touching on all elements of the culture, but also showcasing some of the foundational music and styles that lead us to where we are now. Our shows are basically boiled down to the Ghostface method: “Get some dope beats, say some fly shit”.

What else do you have planned between now and the end of the year?

After the tour, we’re going straight to the studio to begin working on the next record. In addition to that, it’s just basically creating more content based on our EP. Pump out a video or two, maybe release another single. Maybe release a single from the album sessions that didn’t make the record. We have a few nice little pieces and remixes of tunes that just weren’t necessary to be on the actual album. Basically just creating more and better music and content.