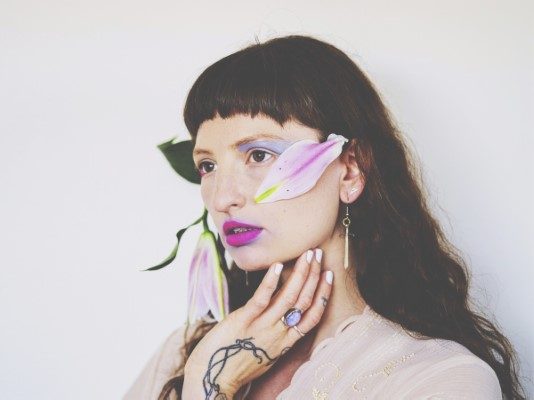 Alt-pop soundscaper Selci is sharing a new live video for, “We Could Be Together,” in celebration of the release of her debut EP, Effervescence, officially out today. Recorded inside Selci’s Calgary apartment, “We Could Be Together” soothes and sparkles at the hands of jazzist Timothonius on keys, and features Calgary producer Egypt on beat pad and young singer Heidi Shanklies. Look for the Calgary-by-way-of-Winnipeg artist when she heads out on a cross-Canada tour in October.

Check out the video and tour dates below and find out more about Selci in our Five Questions With segment.

HI! My name is Samantha Selci, I am an alt-pop artist who performs under the name Selci. I like to sing, write songs, produce music, and sometimes direct music videos, and DJ parties. I also work as an AV tech at the National Music Centre in Calgary. I released my debut EP, called Effervescence, today. The album is the manifestation of a transformation that I experienced over the last few years. I fell in love, am learning to love myself, and created new visions for my art. I learned how to produce music and have been taking the reins on all aspects of my artistic output. It’s been a liberating time for me. I can’t wait for all of you to hear the EP, which is available to stream on my Bandcamp page.

I like to blend pop music with electronics, ambience, and strokes of modern R&B. I like to create strange and unexpected sounds, like sampling my doorbell or processing my voice through an arpeggiator machine. I try to put my own spin on pop songwriting techniques by producing with experimental sounds. I also had the opportunity to work with sound guru Sylvia Massey (Prince, Kate Bush) on my EP, and I have always been inspired by her approach to music. She is incredibly knowledgeable when it comes to technical details, but her unorthodox approach to production is incredibly unique. She taught me that sometimes you have to do ridiculous things to get the take. I am so excited to work with her again in the future.

My live performance is usually me playing a solo set with electronics and singing my heart out. I play a combination of synths and samples. Recently I added a keyboard player, three backup singers and a contemporary dancer. I am excited to add drum pads, electric bass, and more dancers in the future. During my tour, my costume and stage design will be frilly and pastel, like a dreamy renaissance bedroom.

I’ll be heading out on tour in October with dates across Canada. I’ll be playing a warehouse party in Vancouver, the beloved Handsome Daughter in Winnipeg, at the infamous Casa Del Popolo in Montreal, and more.

The track, “Strangers,” is a good example of my style of blending pop flourishes with experimental sound designs. It’s got a trappy beat, a typical structure, and airy vocals. But the synths and some of the samples are really aggressive. Essentially, this song is the biggest banger on the album.

Lido Pimienta – Seeing Lido play live is a mix of incredible musicianship, full-on sketch comedy, and political protest. All of this is encased in her absolutely breathtaking vocals that shatter my entire being. Her Polaris Music Prize win from a few years back was SO well deserved.

Laura Hickli – One of my favourite Calgary musicians. She is a true talent with immense emotion and skill in her artistry. I cry every time I see her play.

Peaches ­– One of my heroes. She inspires me to fully embody who I am an artist. I am in love with her sound, aesthetic, and stage/costume design.