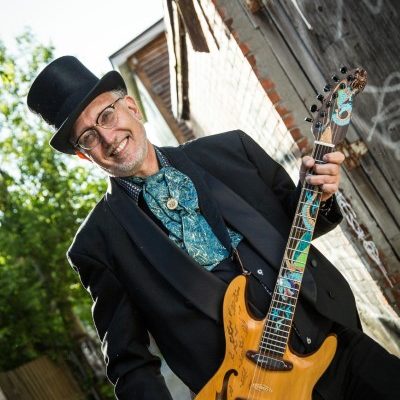 Montreal’s Danny Blueberry (aka Danny Fonfeder)has unveiled a video for his newest single, “Undress Me With Your Eyes”. The single is from his latest album, Isolation which was released on August 17, 2019.

Check out the video below and take a few minutes to find out more about Danny’s amazing story in our Five Questions With segment!

Hello everyone, my name is Danny Blueberry and I grew up in total isolation in a strict religious family with little access to the secular world but plenty of access to music in the forms of praise choirs and prayer psalms.

When I was eleven I heard “Walk this Way” by Aerosmith in the car before my parents could shut off the radio.

From that point on, I knew I was meant to be involved in the world of music – writing about how I really felt– yes – singing ancient words of prayer in a choir or at the Sabbath table, not so much.

In 1972 when I was eleven, my cousin told me about a band named Queen and further digging led me to Heart, Pink Floyd, and The Rolling Stones.

I used to sit in front of my record player and listen to those albums over and over again until the vinyl wore out and they were unplayable.

The cover of my Heart album mysteriously disappeared – it was confiscated by my father because the front photo of the two Wilson sisters with their shoulders exposed was too revealing to have in a religious home.

My parents, relatives, and school mates had no understanding of what was going on in my head and my obsession for rock, they basically thought of me as weird.

In the religious boarding schools where I was sent from the age of thirteen, listening to non-religious music was forbidden so I bought a cheap transistor radio, hid it in a tissue box next to my bed and late at night, when the dorm counsellors had left and my roommates were sleeping, I used a set of spliced together Radio Shack earphones (so I could listen in stereo) lay on my bed and listened for hours to the latest music from the Police, AC/DC and Led Zeppelin and my favorites Queen and the Stones.

A guitar was gifted to me as a bar mitzvah present from my cousins – and has never left my side since.

Although I felt he should be writing music and was curious as to how it was done, it would be several years before I would write my first song, “Have a Happy Birthday” – with its minor chords and punk rock rhythm – I was 17.

My second song, Batman and Robin about my infatuation with Batgirl (played by Yvonne Craig) from the 1970’s TV show came next.

Finding myself in an arranged marriage at the age of 23 with young children quickly following and being trained in the family business, I continued to write songs that I could not pay anyone around me to listen to – to say I was discouraged from starting a music career would be an understatement.

Twenty years passed and I continued writing songs that just accumulated as a document to what I was experiencing.

Finally, in the early 1990’s I met up with two “born again” religious musicians who entered my very secluded community and I convinced them to record twelve of my original songs professionally – the results of those recording sessions, from 1992 to 1994 are found on my debut album, ISOLATION which also features four new songs written between 2015 and 2018.

In 2005 at the age of 44 after a bitter divorce, I finally exited the religious community and started a popular handmade guitar company Blueberry Guitars (www.blueberryguitars.com) named after my two-year-old daughter, Blueberry.

The Blueberry Guitars workshop is located in the exotic Indonesian island of Bali where traditional Balinese woodcarvers express their art and carving skills onto the bodies of acoustic and electric guitars that are built from scratch using local and exotic woods.

In 2009 I started playing and performing the many songs I had written from the age of 17 at open mic nights in Montreal bars, cafes, and clubs.

Brutopia, O’Regans, The Brass Door, Ye Olde Orchard, Shaika, Mariposa the list goes on – any bar that had an open mic night would also have Danny Blueberry on the list.

This went on for many years – staying there and meeting musicians until the very early hours – to my amazement the audiences loved my lyrics and songs and started requesting them – the songs were fresh, unique, funny and direct and written from a totally different angle than the music anyone else was playing – many people also found the songs to be hilarious.

My habit of telling the story about how and why each song was written before performing it in became a popular part of my shows.

Fans of my songs started accumulating, and in January 2018 I played a sold-out show at Montreal’s respected Café Mariposa – I played 32 original songs and captivated my audience for three hours – a second show was played shortly after at Café Shaika for people who could not attend the first show – this time I was backed up by Bugs United, with my good friends Allison Von Der Lande and Elias Morkos.

Better late than never, in 2019 at the age of 54 after discovering a deep and disturbing truth about my roots, I decided that it was time to release my first album, Isolation and focus on what I believe I am meant to do on planet earth – entertain and express myself musically.

In my music, there are shadows of Queen and Rolling Stones but the minor chord progressions and harmonies come from the Shtetel and the angst and rebellion are obvious.

My melodies are pure; the songs are beautiful and they often rock hard.

My songs are not meant to be funny and yet the audience often breaks out in laughter– this is what happens when you grow up in total isolation, you write with the tools that you have without a frame of reference as to how the real world will react.

I like to tell stories that are direct and descriptive and I do not pull punches – my viewpoint is very unique so the songs end up being unique.

I pay a lot of attention to my melodies and lyrics and I never write anything based on what I think is popular – musically, my earliest influence was Queen, I knew every note and every lyric of their first six albums,

as well as most of the early Pink Floyd up until the Division Bell, and I obsessed over the Rolling Stones, Dire Straights, and even The Cars.

There are also a lot of melodies reminiscent of the old Jewish hymns I used to sing in the choirs and at the Sabbath tables – so my music is very melodic, witty and somewhat eccentric.

We are in now scouting locations for upcoming shows in Toronto, Calgary, Edmonton, Vancouver, Quebec City, and Halifax and expect to announce tour dates in the next few weeks for shows taking place in November.

Unlike most bands who book gigs in normal clubs, we are looking for large rooms that we can decorate to our theme and have complete control of the sound and experience.

My shows are very theatrical, colourful and participative and most of all, fun – I find it very important not to take myself too seriously and there is a punky funny attitude that is pervasive in my music.

The songs we play are catchy, unique, danceable and moshable.

We dress up in loud and eccentric outfits, and we make use of Flutes, Djembes, Darbukas and shakers along with the traditional drums, bass, electric and acoustic guitars and keyboards.

The songs often have full harmonies and tempo changes as well as extended danceable jams.

A Danny Blueberry show is an all-inclusive celebration.

We just played and hosted an all-night party at Montreal’s historic THE WHEEL CLUB on August 17th to celebrate the launch of my Isolation album – it was an elaborately planned night. I had the entire club decorated to look like a glowing enchanted forest, and guests were encouraged to dress brightly and eccentrically ( $10.00 off the ticket price if they showed up in costume) – during the break between sets, the audience was treated to a burlesque show and after the set, a pole dancing exhibition was put on by my friends who own a dance school.

My shows are unique, exceptionally decorated and fun as hell.

That is really not an easy task as I have written 67 songs so far and none of them sound the same, so many different genres in my way of writing but I suppose if you have to choose one song, let’s make it Undress Me With Your Eyes which is actually the first single from the Isolation album – it has the sort of “Klezmeresque” guitar riff and I’m quite proud of the tongue in cheek lyrics.

Well since you are asking about current Canadian bands, I will name my favourite Montreal bands who are also my friends, Po Lazarus, The Steady Swagger, and Street Meat.

Less current, I was a big fan of Bran Van 3000, April Wine and the Tragically Hip.