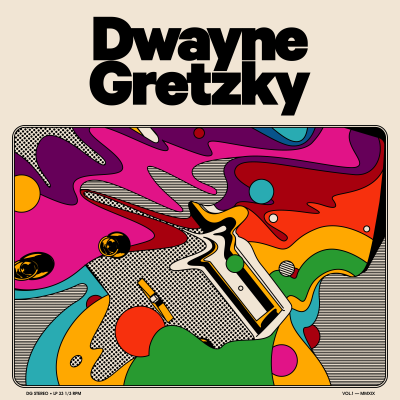 Dwayne Gretzky has done it all in the music business in the last 8 years, hundreds of sold-out shows and even playing on the same show as The Rolling Stones, they are releasing their self-titled debut album, featuring 11 cover songs, mixing their moody pop/disco inspired music into the classics.

The one thing I try to do with cover songs is how the bands take the original and spin it into their own. The opening track, a cover of ABBAs “S.O.S.” does just that. It’s bubbly to match the original song but has its unique style to it. Now the second track, a cover of Queens of the Stone Age’s “Make It Wit Chu”, is completely different from the original, grungy type song as they turn this into a dancefloor bop, something you’d never expect with a QOTSA song.

Now the only cover I was worried about was a cover of The Cars “Just What I Needed” as I love that song so much. Hearing an acoustic guitar at the beginning caught me off guard but I don’t know who the vocalist is in this song, but he is hauntingly beautiful. This song is the cover of the album and I’ve only just started. I never thought I’d hear a slow, melodic version of a dancy pop song from the 80s and enjoy it, but here we are.

Another cover that caught my ear was the cover of The Beatles “Please Please Me”. Imagine the style of “I Am The Walrus” with the lyrics of “Please Please Me” and you have this song. It’s an adventure of the ears and emotions. The cover of Erasures “A Little Respect” was new to me as I’ve never heard the original so I can’t compare it and I’m glad I did. The song is a catchy, long-drive song with tons of replay value that I could hear on the radio heading into the fall.

Van Morrisons “Crazy Love” is an amazing song so leaving their cover for last was a smart move. The emotion and passion they brought into their version gives the perfect closure to the album. The church choir throughout the song gave me chills and the amazing vocal range of the singer, fused with the excellent musical ride throughout gives this album a huge thumbs up from a fan of covers like myself.

Take everything you know about 80s & 90s radio hits and throw them away because Dwayne Gretzky is giving you a whole new experience with this album. It shows their 8 years as a band have given them so many opportunities to try new things but they stuck with good classics. If you like one song or band that these guys covered, then this album is something you need to listen to.