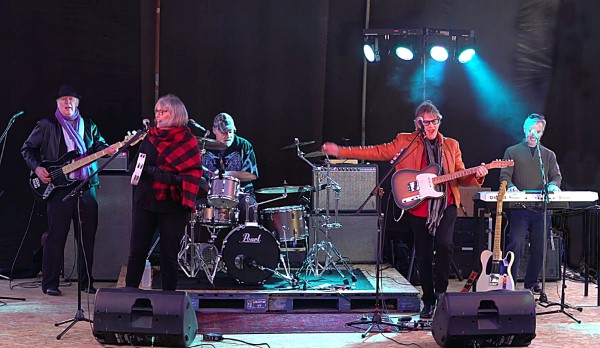 BC’s own Glen Foster is back with a brand new video for his single, “Rockabilly Fever”. The single is from his newest EP, Party Out There Tonight. It’s a high energy rockabilly anthem that is sure to have your feet moving and your head bopping!

Check out the video below and find out more about Glen in our Five Questions With segment.

Hi, I’m the leader, singer, guitarist and songwriter of Glen Foster Group. This band has been together now for over ten years and I’ve been playing guitar since I was ten years old. I live on Vancouver Island but started my music career in Ontario and have toured extensively for ten years, crisscrossing Canada several times. I’ve studied various forms of music and have been a dedicated music teacher over the years. I’ve produced six studio albums so far and produced numerous music videos. Some of my close friends call me Falcon because I started a band with that name in Hamilton several years ago.

I quite often perform as a single or duo using acoustic guitar, so I’m comfortable playing most of the music I write with just a guitar either fingerstyle or Flatpicking. I try to come up with something musically distinctive when I write a song, either a signature lick, riff, melody or chord progression. Then a basic song can take on different characteristics becoming rock, country-rock, swing, blues, jazz or whatever I feel like making it. As a result, my style is fairly difficult to pigeon-hole other than being a songwriter who plays acoustic and electric guitar-based modern music that you can’t fall asleep listening to! Lyrically I’m motivated by meaningful real-life experiences that I may encounter through travel to fascinating places, relationships with intriguing people or sometimes stories that I read in novels or short stories. I would rather spend weeks refining lyrics for one or two songs at a time than slam out numerous songs that are not inspired by something emotional or of some significance to me.

This summer, as usual, we’ve been busy with festivals, outdoor concerts, and a few private gigs, mostly staying close to home and just touring on Vancouver Island. The next event is ‘Arts On The Avenue’ in Ladysmith BC playing outdoor shows Aug 24 at 8 pm and Aug 25 at 1 pm. Then we’re back at one of our main haunts ‘Lighthouse Bistro & Pub’ in Nanaimo BC on Aug 30 and 31. Our full schedule is on my website at https://glenfoster.ca. Our live performances for Glen Foster Group typically include the 3 piece guitar-bass-drums format, plus a female singer/percussionist and occasionally a keyboard player. Everyone sings so we tend to highlight our harmonies and focus on dynamics. I’ll play a few songs on acoustic guitar and then rock out with the electric. One of my passions is finger-style guitar so I mix in a little Chet Atkins style and some folk guitar pickin’ as well. We stick mostly to our original compositions and mix in the odd cover song with a unique arrangement.

That’s difficult because my writing covers such a broad spectrum of genres. But I would like first-time listeners to know that we are energetic and fun so I would direct them to the title song of our current EP ‘Party Out There Tonight’ which incorporates most of the elements of our live performance. This song was co-written by comedian Glen Foster ‘That Canadian Guy’ so it has some colorful lyrics as well.

There are so many, but I always love seeing my friends in Trooper who have such a great party-vibe show, and my pal David Gogo who is a phenomenal blues guitarist (and a former guitar student of mine).