PREMIERE – Queens & Kings release new single, “You Got Me” 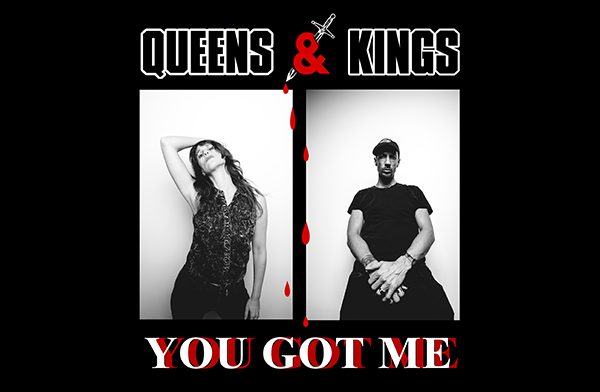 Toronto, ON-based garage punk duo, Queens & Kings is made up of Alissa Klug (drums/ vocals) and Brendan Albert (guitar/ vocals). The duo has unveiled their debut single, “You Got Me”, which is the first offering from their upcoming EP.

When describing the song, the band states that it is “A searing anthem powered by rage and mockingly seething lyrics, the song is seemingly about an unwanted come on, but it actually aims to call out the transparent absurdity found in the words and deeds of many of today’s most prominent politicians.”

“Some of the things that are said and done by some of the actors in today’s politics are just no better or more believable than a sleazy, tacky unwanted come on. You’re not buying it, but somehow they are getting away with it, and it simply boggles the mind.”

The track will be followed by an official music video which was filmed in Aruba and Toronto, so stay tuned for that.

Check out the single below and find out more about Queens & Kings via our Five Questions With segment.

We are QUEENS & KINGS a garage rock band with post-punk aesthetic and a very physical performance style. The main setup is Alissa on drums and vocals and Brendan on guitar and vocals but we like to switch it up in creative ways by trading instruments and even playing multiple instruments at once.

Our music is largely a product of our relationship with each other. Although it’s a newer project we have been together for almost 9 years and this project is the ultimate release of all of the struggles we’ve had with each other and we hold nothing back on stage.

We are actually holding our debut single release for “You Got Me” at the Dakota Tavern tonight (August 21st)! For anyone from Toronto, swing by! It’s gonna be a great rock show! Starts at 10. We’re playing an awesome private festival at the end of the month, playing Lola on Sept. 20th and have some other great shows coming up so check our website and social media pages to keep updated on those!

Our live performance is very raw and honest, just a total physical expression and release of all that we are going through in our lives and with each other. The audience really responds to this and seem to release their inhibitions and get right into it with us.

“You Got Me” is our debut single so we don’t have any other studio versions of songs available yet, but our upcoming EP is in the works and we are really excited for our next two singles (which will be “Earthquake” and “I’m Beggin’).  We will also be following up our audio release of “You Got Me” with a video release within the next couple of weeks, so watch out for that!

We like the Vancouver band The Organ a lot who unfortunately are no longer together as well as Controller Controller who are also defunct. Magneta Lane is another good one…

The city of Toronto is incredibly rich with talent and is such an amazing and underrated music city. We have so many friends who we really admire musically, too many to mention really and we don’t want to go down that rabbit hole…We know our friends Neon Bloom recently premiered their video with you and they are definitely one to look out for…