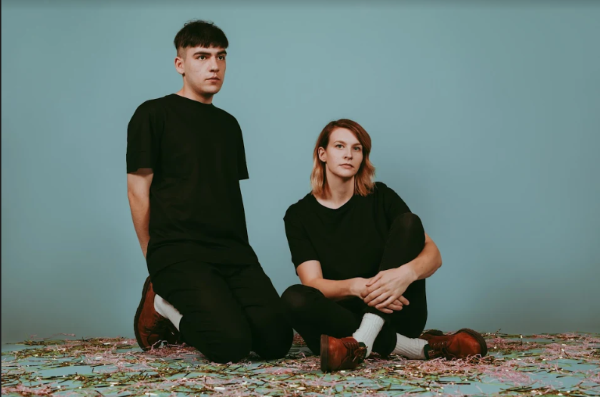 Vancouver, BC-based indie-pop duo, Adera has teamed up with us to unveil their video for their brand new single, “Little Feather”.

“Little Feather was a bit of an outlier for a while. It wasn’t given the same attention as the other tracks we put together on the new EP at first. It came about from this loop of tom samples that were pitch-shifted around. You hear them in the intro of the song and then throughout. I (Tiffany) realized that the pattern was in an odd time signature but left it because it gave the loop this interesting unstable feel. I would revisit the loop and build lyrics around it and then once there was something that resembled a song I gave it to Tomas to play around with and produce. It almost didn’t get recorded but we ended up adding it to the EP at the last minute.”

Check out the video below and find out more about Adera via our Five Questions With segment.

Hi, we’re Tomás and Tiffany. We’re from Vancouver and we make up the creative core of Adera. It’s nice to internet meet you.

We’ve always attempted to make music that sounds pop-oriented but has something different happening. We like to try to find catchy melodies and then pair them with things like time signatures that aren’t in 4 or structures that aren’t typical pop structures. For lyrics, we search for content that is meaningful, not that pop songs aren’t but we do like to really dig in hopes that the listener will think deeply about something they weren’t expecting to based on the sound of the music. Whether or not we’re successful in all this is another question, haha but these types of things get us pumped to make songs.

We are pretty excited to be playing with Chersea and Royal Oak at The Fox Cabaret in Vancouver on Saturday, August 31. (Here’s a ticket link in case you want to go: https://bit.ly/2OYBJwY)

Our live performance is just big. Not because we think we’re awesome or something but because there is a lot going on with our setup. There are three other people besides ourselves who play with us live. Shout out to Luke, Anthony and Trent! So we’ve got saxophone, drums, guitar, bass, synth, samples and vocals going on. It just sounds massive to us and we’re really happy with how our live performance has evolved over the years.

‘Little Feather’ would be the one. It’s our newest single (thanks to Canadian Beats for premiering it!) and the first off of an EP called ‘Inward’ that will be released later this year.

It’s this electronic indie summer banger haha. For real though, it’s got this bass sample at the start that’s a lot of fun and we think will make you move.

(this is Tiffany) At the time that this song was written, I was struggling really badly with anxiety. I still do but not at all like before. I kept getting these intense migraines every other day, I wouldn’t wish them on anyone, that’s how bad they were. I learned as much as I could about what was going on and was able to get them under control. That’s where this song came from, the realization that it doesn’t matter who you are and what you’re struggling with mentally, you can get better. It takes a lot of education and working hard on yourself but anyone can do it if they are patient with themselves. It was a powerful realization for me and I thought it might be helpful to at least one other person if I shared it in a song.

We both loooove We Are The City, Royal Canoe, Caribou, Begonia, and Half Moon Run. These artists always seemed to be pushing the boundaries beyond where we thought music could go and that’s always been inspiring to us.

Thanks, Canadian Beats for the questions and to you for reading them. We hope you get something out of ‘Little Feather’ whatever that may be for you. –xo Tomás and Tiffany