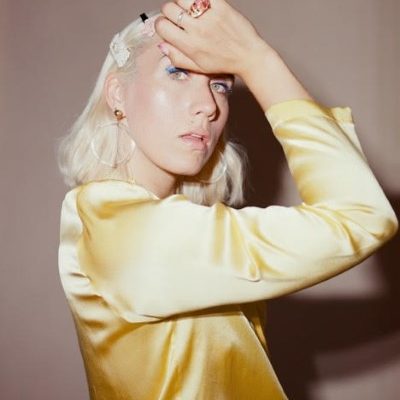 Toronto, ON-based pop artist, Ralph is back with a brand new single, “No Muss No Fuss”, along with a music video for the release, which was shot on 16mm film.  It was directed by longtime collaborator Gemma Warren and depicts RALPH dancing with exuberant confidence in her best 90s ‘fits as she sings about cheekily brushing off a creepy ex. This is the second single from her upcoming EP, which is due in November.

Ralph shares on the video,

“We just wanted a feeling of effortless fun to translate. We didn’t overthink the shoot. We scouted the day before and drove through Gem’s favorite neighbourhoods (Atwater village, Silver Lake, Echo Park), just taking pics of interesting looking spots. We wanted vivid colours and weird landscapes that would pop on film – like the golden yellow straw and the stacks of rubber tires. The song has a bounciness to it that makes you want to move, so we wanted to focus on organic, quirky movements instead of actual choreographed dances – playing with hand motions and kicks and spins. The lyrics in the track aren’t supposed to be mean, they’re just honest and a little sassy, so that was the mood we tried to capture.”

Check out the video below and keep up to date with Ralph via her socials!