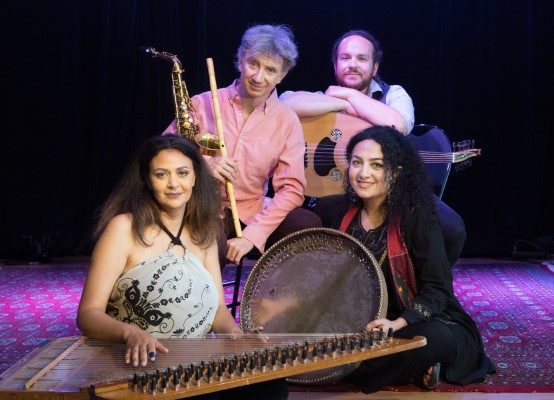 Check out the album below and find out more about the band in our Five Questions With segment.

My name is Maryem Tollar and I love to sing. In addition to being involved in several different and diverse projects, I lead a group called “Al Qahwa” which means “The Coffee House” in Arabic where the music that we do is based on different Arabic music traditions – but the players are very open and we allow many other influences to come into the music that we perform.

I came to Canada when I was 1 year old from Egypt and I grew up loving folk and pop music. In my 20’s, in Toronto, I had an opportunity to have my first professional music gig where I’d get to perform and travel in Europe with a Toronto based dance company – but I had to learn how to sing Arabic music. So I started taking Arabic singing lessons – I knew how to speak Arabic and I was already singing – but I had to put those 2 things together. This opened up the Toronto world music scene to me and I met musicians who were interested and who was performing music from many different regions in the world. I started collaborating with some of them (Ritesh Das – the Toronto Tabla Ensemble, Michael Occhipinto – The Sicilian Jazz Project, Maza Meze – Arabic and Greek music, The Gryphon Trio’s multi-media project “Constantinople” composed by Greek-Canadian composer Christos Hatzis, Jesse Cook – Rumba flamenco, among others. I started making a name for myself as someone who could perform in many different musical contexts, and it really influenced how I composed music and the kind of music that I wanted to perform in my own projects. The first project that I led with my husband, Ernie Tollar had music that ranged from Indian raga influences, to cover songs that we learned from recordings by Miriam Makeba to folk songs that I wrote with jazz influences. Now with each recording project, I try to have a focus of why I’m putting each collection of songs together because my tastes are so broad and I realize that for me, it makes a nicer listening experience (for my recordings) to have a concept or a theme that runs through it.

I have a CD Release concert coming up on Saturday, August 10 at Hugh’s Room Live for my latest recording called “Cairo Moon”. For this performance, my group “Al Qahwa” – myself on vocals, qanun (Arabic table harp) and riqq (Arabic tambourine), Ernie Tollar on wind instruments, Demetri Petsalakis on oud (Arabic fretless lute), and Naghmeh Farahmand on percussion – will be joined by a great Arabic violin player, Alfred Gamil, who is on the CD and who is based in Egypt for the first set, where the music has a strong connection to Cairo and to Egypt. In the second set, we will be joined by Toronto based musicians – Waleed Abdulhamid (originally from Sudan) and Fethi Nadjem (originally from Algeria) – we will be exploring traditional and original repertoire that has more of a North African feel to it. All of the musicians I choose to perform with are amazing musicians in their own right and in their specific traditions, but they are all also very open and enjoy collaborating and improvising in different genres of music and the sound that emerges is very exciting and fun.

That is a really difficult question – I think if I was going to pick one song from our new CD, it would be “Blood/Iddam”. The lyrics are by Montreal based Canadian Egyptian poet, Ehab Lotayef (full disclosure, he is also my uncle), and the music is by me. I have collaborated with him many times because his poetry resonates with me – he is an activist and goes to different places in the world to bear witness to what is happening – such as Iraq, Egypt during the revolution, Palestine during their elections – and then he writes poetry in response to what he sees. In the song “Blood-Iddam”, it is in response to a massacre that happened in Coptic Church in Cairo, and even though it is specific to that incident, I find that the words in the poem can be applied to things happening all over the world, including in Canada and the United States – it talks about water being poisoned and but everyone saying “everything is fine” – and it makes me think of Attawapiskat and the unbelievable water crisis that has been going on there.