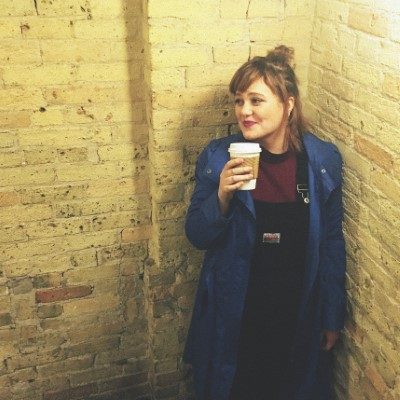 Winnipeg, MB-based Bailee Woods is the creative mind behind housepanther, which is a brand of music that is defined as power pop, slacker rock for the anxious peeps of the world.

Check out the video for “17% Wine” below and find out more about housepanther in our Five Questions With segment.

Hey, I’m Bailee Woods from Winnipeg, MB! I started “housepanther” as a project/creative hub for some songs I had written after dropping out of college in late 2016. I started off just playing solo acoustic shows just for fun, but when asked to play a show with a full band in fall 2017, various friends volunteered to hop on and add their talent to the songs with bass, drums, & guitar over the year! Club Soda Lows was the first album released as this project in 2018. It features ten songs I had written with various parts contributed by friends! The lineup now consists of Bailee Woods, Nick Mann, Alannah Walker & Jeremy Haywood-Smith.

I grew up listening to a lot of pop-influenced music, so when I’m writing the skeleton of a song, it’s definitely coming from a pop/rock background. Usually, I’ll start by writing a chorus. The chords will come first and I’ll hum along with a melody. Lyrics are often last. Once, the chorus is bumped out, the verses and bridges are easier to write because there’s kind’ve a “theme” already in place! When I record demo’s of ideas (just so I won’t forget how to play it or to come back to it and experiment with the song until I’m happy with it), I’ll sometimes attempt to add bass and extra parts overtop of the vocal and guitar tracks. If it’s a song that ends up making it out of my computer and into the jam space, I like to leave it up to the band if they’d want to play their own parts on top of the songs instead!

This fall I’ll be participating in Pop Montreal for the first time and then I’m touring around Ontario and Quebec as part of DevilDuck Record’s Youngbloods tour series along with Cold Tea and Wrecker. Some upcoming dates are:

For our live shows, we’re just really happy to be getting the chance to play. So, we try our best to perform as best as we can, while also still being ourselves! I think with music or any entertainment, there’s this misconception that you have to be super professional or super strategic as to how you want to present yourself onstage, which is totally fair. But, I think the funnest shows and the shows that stick with me the most (personally) is just seeing people get up and have a genuine experience with an audience and with each other. So, often times we’re either laughing at ourselves for being nervous or making the odd mistake, trying to connect with an audience as much as possible whether it’s through stories or our attempts at joking around if time permits, and trying to perform the songs to the best of our ability!