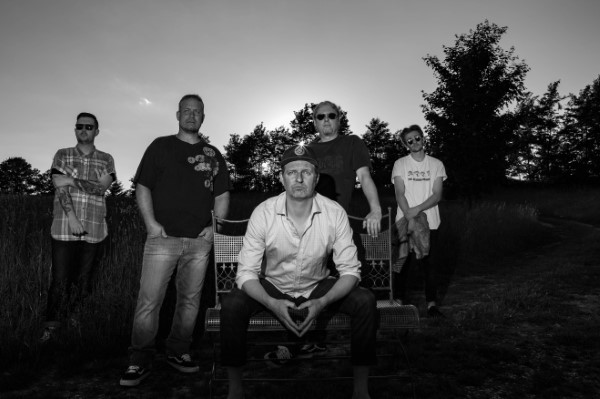 Check out the video below and find out more about REAY in our Five Questions With segment.

Ya absolutely,  Hey everyone, it’s Sean Murray and I am so pleased to introduce my newest project REAY (pronounced Ray) to you all. We are an Alternative Indie Rock band. Although our abodes are scattered throughout south/central Ontario we officially hail from Orillia. I am so excited for our debut album “Butterfly Tongue Revisited” to be released September 6th.  The album has been a project of perseverance. It’s been in the works for 15 years … Now it’s finally finished. And it’s the most soul-cleansing experience of my life.

When the songs for this album were being written, my biggest rule was can it be sung with an acoustic guitar and translate as a really good song.  If so, it made the initial cut to be developed into a demo.  From there, we just kept narrowing the songs down to the 15 best to take into the studio.  It was really important to produce an album where every song didn’t sound the same in addition to ensuring that it was a journey from beginning to end.  Not many albums are created this way anymore, they are just a collection of singles.  So for every song, we tore down the drums and would set them back up in different spots with different mics, snares, symbols.  We even used a fan grate as a high hat in one song.  The same with the guitars.  We tracked multiple guitar tracks and mixed them to create just a couple of performances.  Several songs have multiple drums playing and panned to opposite ears.  Definitely listen to the album with headphones and enjoy the ear massage and placement of the instruments.  The album has many euphoric melodies and hypnotic rhythms – it’s intended to be a musical journey from start to finish with a total of 9 tracks that made the final cut.

The band has been rehearsing hard getting ready to play our first live show in Orillia in late August at a private event.  We plan to have several album release shows in the Barrie/Orillia area and in Toronto in the fall, followed by several shows scattered throughout southern Ontario leading into winter.  Hopefully, the album takes off so we can tour more extensively throughout Canada.  Live, we are going to be a little more raw and energetic than the album but attempting to keep true to the production values of the recordings.  I have extremely talented musicians playing with me so I am so stoked to start playing these songs live. It’s going to be so much fun.

Wow, tough question since the album is so diverse. From a singer/songwriter perspective it would have to be either Junkyard Hill or Spirit, but from a more radio-friendly perspective Lemondrop Girl or Halo….hmm..but if just one song?  I would go with “Lemondrop Girl”.

So many to choose from, but if I stay current the Canadian bands that are on my playlists or that I have seen live recently it would be Peach Pit, Arcade Fire, The Stars, Andy Shauf, Jon Bryant, Patrick Watson, Ron Sexsmith, Sam Roberts, Sarah Harmer, and Sloan.