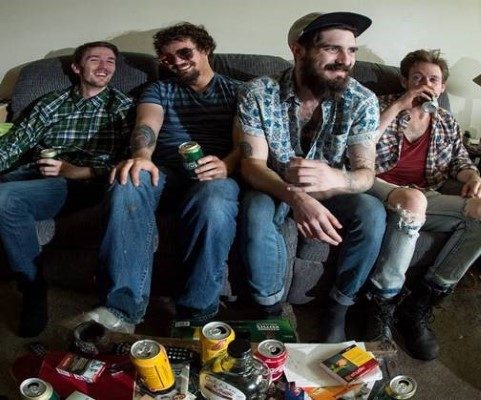 We caught up with Screaming At Traffic to chat about their Canadian tour dates.

The band has also unveiled a video for their single, “Weekend Cartoons”, check it out below

“When we were recording “Weekend Cartoons”, our producer Jordan suggested that we bring in Jenna from Mobina Galore to lay down some guest vocals.

We loved the idea and her voice helped give the song a bit of an edge.

Fast forward a couple of months and we came up with the idea for this super simple video.” – Jacques Richer

Now find out what the band is looking forward to in EVERY city across Canada that they will be touring to in the next few months!

“Great Lakes is something that comes to mind when I think of Thunder Bay. It’ll be our first time there, so I won’t have a fun anecdote until after the tour!”

“Birthday. When we booked the show at The Asylum in Sudbury, we found out our show was going to be the same day as the booking agent’s birthday, so we’re definitely looking forward to helping him celebrate! It’ll be a great way to meet the folks there.”

“Re-united. In London, we’re going to be playing with pals of ours, Nameless Friends. We played together in Winnipeg for one of our first shows, and we’re super excited to meet back up with them in their hometown!”

“Tacos. This might seem like a weird one, but we’re playing at a venue called Doors Taco Joint & Metal Bar, and honestly, that sounds fucking rad.”

“I know I already used this already but BIRTHDAY! It’s our bass player Paul’s birthday the day of our Toronto show so we’re definitely looking forward to spending the day in Toronto and playing the legendary Bovine Sex Club that evening.”

“Labelmates. Ottawa is going to be our first show with our label mates Oakhearts, and our pals in Jeffrey Lost Control. This is the first time we’ve had consistent dates on tour with another band and we’re stoked to hit some dates with them!”

“Release. This show is going to be wild, Jeffrey Lost Control are releasing Small Town Rivalries on Vinyl at this show in their hometown, and we’re super excited to be a part of it!”

“Anniversary. In Quebec City, we’re also helping Jeffrey Lost Control celebrate their 20thanniversary, as well as Panic Attack’s 10th anniversary! It’s going to be one hell of a weekend for JLC!”

“Ocean. Beautiful landscape, ocean coast, & fresh seafood? What more could you ask for!”

“Rap. We love genre mash-ups when it comes to shows, and in Fredericton, we’re doing a first, we’re playing with hip-hop artists at Affirmation Lounge.”

“Poutine. Every Canadian I’ve ever met knows and loves poutine, and you bet you’ll find us hunting some down in the Poutine Capital of the world. We’re also getting our show at Turbo Haus in part sponsored by a local brewery, Le Trou du Diable, so we’re definitely looking forward to drinking some great micro brews!”

“Horns. We’re playing with ska-pop-punk kings Keep Flying in Waterloo, and we are friggin’ stoked to dance around to these pals!”

“Cabin Country. We have a couple of buddies who have cabins out in Kenora, since it’s pretty close(ish) to Winnipeg, and we love heading out there in the summers and jumping in the lake, and drinking in the woods.”

“Rivalry. I’m kidding, but there definitely does seem to be a friendly rivalry between Manitoba and Saskatchewan… Maybe it has it’s basis in the CFL? Either way we’re super stoked to be back rocking it up at the Black Cat!”

“Buds. We often call Calgary a home away from home, and we mean it. On our first tour out west, we played a sweet event called Rockin’ for Dollars, hosted by BJ Killer, and it was amazing. We got a chance to meet so many people that ended up becoming good friends of ours, and we try and make a point to get to Calgary as often as we can. There are a ton of great bands and people from there, and I honestly think Calgary has one of the best scenes in the country! You can definitely catch us drinking beers (and ciders) with The Ringwalds before the show.”

“Glacier. Golden is a beautiful little town. The Rockwater, where we’re playing, has a gorgeous glacier river running right behind it that runs through the town, and the entire place looks like something off a postcard. It also has an awesome BBQ restaurant that we’re definitely gonna hit up.”

“DIY. The place we’re playing in Abbotsford has a crazy cool D.I.Y. Feel to it, and the space is super supportive. The last time we played there we were blown away by how many people came out to support us, and how friendly everyone was.”

“Harbour. I can’t speak for the rest of the band, but I am a sucker for oceans.”

“Duncan. This town obviously has more to it then this, but Duncan is the other singer and guitarist in our band, and we’re playing at a place called the Duncan Showroom, and if that doesn’t crack you up a little bit, I don’t know what to say.”

“Commune. The last time we were in Victoria we got to stay with a couple of friends who live on a commune in Victoria. It was such a cool place to be, and met so many great people, and really set the tone of Victoria for us.”

“Metropolis. Vancouver is not the biggest city we’ve ever played, population-wise, but it is super densely populated, and make it seem kind of like a giant maze. I’m stoked to wander the city a before the show and see what kind of things are hidden away! Then, of course, our show at Pat’s Pub is going to be sweet.”

“Mountains. We’ve only ever driven through Revelstoke, and I think stopped there for gas once, but the town looks beautiful, and I’m looking forward to watching us all try andhike a mountain after living in a van for over a month. “

“HOMETOWN! What can we say, we love Winnipeg, and we wouldn’t be anywhere without the support we get at home. So many people have been behind us since our first show, and we’ve gotten tons of great opportunities from it, like on September 13th, when we play night one of SOS Fest at The Park Theatre, with the legendary Good Riddance! Make sure you pick up tickets for both nights so you don’t miss Cancer Bats, and Single Mothers on night two (alongside a ton of great locals!)”