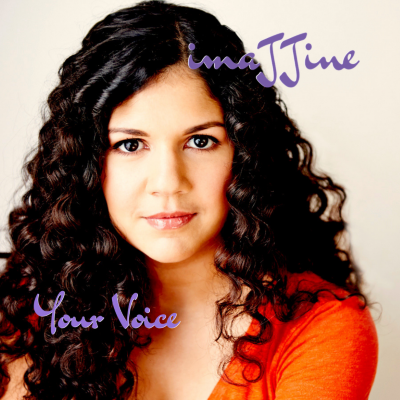 The collective’s first single, “Your Voice” highlights the stellar talents of Michael Stuart and Brittany Miranda. Check out the lyric video below and find out more about imaJJine in our Five Questions With segment.

“I started as a drummer at age seven and played my first paid gig at age 12. Leaving school at 15 I joined the band, Rare Amber. The next year was spent driving up and down the motorways of England playing at clubs across the country – 5 musicians, a roadie, and the band’s equipment all packed into a transit van.

Following a trip to Germany – 2 weeks playing 7 hours a night – not only pulled the band together but also ensured we all lost weight… We never got paid and spent the whole 2 weeks surviving on jam sandwiches! Returning to England we signed to Polydor and went into the studio to record our first, and only,  album.

Soon after the release of the album, with rising debt, mounting internal dissension and management problems the band broke up. With no promotion and no band to support it, the album quickly disappeared, only to later become a collector’s item with copies selling for as much as $500.00.

Leaving the band I moved into engineering at Phillips Studio in London where I worked on albums for ELO, Dusty Springfield, Cleo Laine, The Move, Ben Webster, Scott Walker, Rod McKuen and many others. Moving to Decca Records I spent 3 years as a record producer.

After a short stint in Nigeria, engineering and producing the album BLO – Step Three, I moved to Canada.

My first production was the Gold Certified album Black Noise by FM. The album is listed as one of the 50 Top Progressive Rock Albums of All Time, by Rolling Stone magazine.

As a senior music producer for CBC radio, I worked with many great international artists including Ella Fitzgerald, Sarah Vaughan, Oscar Peterson, Jaco Pastorius, Keith Jarrett, Mel Torme, Pat Metheny, John Scofield, Roberta Flack, The Temptations, Donovan, Robert Palmer, and many others.
Moving into the 90’s I continued to work as a producer and also created 2 groups – The Gospel Project and Kaleefah.

in 1991, I founded KC Records, scoring hits with, “Someone for Me” by Selections, “Go Go Dancer by Christine, and the JUNO Award-nominated album “Listen to the World” by Kaleefah.

With the turn of the new century, I expanded my creative vision writing and producing my own material, including 3 musicals. I produced the Classic Jazz Album of the Year “Stride” featuring Doug Riley, Tyler Yarema, and John Roby wrote and photographed “The Adventure Guide to Barbados”, and completed my first novel “Always: You’ll Never Walk Alone”.

My new project, imaJJine is a combination and a culmination of my skills. I’ve brought together a collection of the best, young and established, musicians and singers in the country, and created, wrote, arranged and produced an album which so far is garnering very positive reviews.

My first love was jazz so that has been a big influence on a lot of my work. But music is music and one style is not inherently better than any other. I enjoy a well-crafted pop song as much as a Beethoven symphony, an Italian opera, a jazz big band, a bluegrass group, or a Miles Davis Quintet. As a drummer, rhythm is usually the foundation I start with. But what makes a song memorable for the average listener is melody. Combine the two and you have the foundation for a great piece of music.

I am primarily a lyricist. I love taking someone’s melody and creating a story. But many times I come up with a lyric then turn it over to a writer to create the melody. Sometimes I have an idea of the style I want. Other times I write the lyrics and say, “See what you come up with”.

For the album “Love Songs & Lullabies” I had the good fortune of working with 12 great writers and the results have been amazing. To write a lyric, have someone create a melody, and then hear the best musicians and a great vocalist perform the song is one of the greatest thrills imaginable.

The music on the album is based in jazz but incorporates elements of blues, soul, gospel, R&B, and there are even some Karen Carpenter harmonies somewhere in there!

I’m currently speaking to some agents and working on putting the live show together.

With 18 songs recorded it’s difficult to come up with one song. The first single from the album “Your Voice” is one of my favourites partly because of the way it came together.

The lyric was inspired by Joni Mitchell. I wanted to create a song that had elements that would reference her work, particularly who work playing with Jaco Pastorius.

When we recorded the bed track I wasn’t sure if I’d captured what I was looking for. So I went back into the studio and replaced the bass guitar and added rhythm guitars. This really lifted the song and took it more in the direction I wanted to go. I had Michael Stuart record the vocals and sax solos. Then felt the track needed some percussion. So brought Vito Rezza in and added congas, shaker, and surdo. At this point, the track was sounding really good but still wasn’t quite there. So I brought Brittany Miranda in and added some vocal lines, which were actually lyrics from another song on the album, “Serenity In Blue”. The final result is exactly what I was looking for and became the first single. If Joni ever hears it, I hope she likes it!

My favourite all-time Canadian artist is Joni Mitchell. I don’t get a chance to hear many new artists. Certainly, Marc Jordan, who I produced an album for many years ago, is another favourite. Both his songwriting and his voice have become better over the years, and he started out being a pretty good writer and singer! All the singers on the album are exceptional, Brittany Miranda, Jeremy Tozer, John Alcorn, Alex Samaris, John Roby, Rashita Barua, Jackie Richardson, Arlene Duncan, Gavin Hope, and Alisha Oliver. Some have albums out, others you should check out whenever they’re playing live.