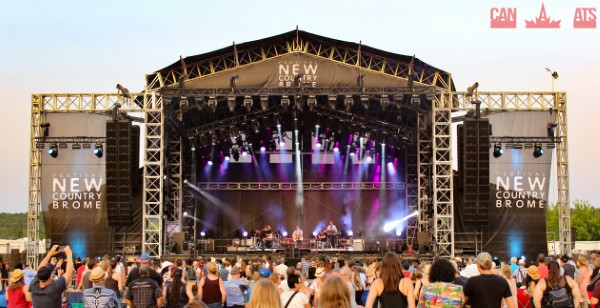 Friday’s artists included; Sara Dufour, Matt Lang, Aaron Goodvin, and Tebey. Dufour kicked off the country music early in the afternoon with her own special blend of country, bluegrass, and rock before Lang hit the stage around 6 PM. Lang was high energy as he primed the crowd for Goodvin and Tebey. Goodvin and Tebey had the crowd going strong as they brought the evening to a close with their biggest hits and fan favorites.

Saturday was another stellar line up of artists including; Wayne Law, Amélie Hall, Jess Moskaluke, Chase Rice, and Paul Brandt. Law and Hall entertained festival-goers during the afternoon and kept the music flowing. Moskaluke hit the stage and blended pop hits and country hits alongside her unique brand of country music. Rice was entertaining and was able to elevate the crowd and gear them up for the legend, Paul Brandt. Brandt brought his familiar style and iconic voice to the stage and closed out the Saturday evening with a bang.

Sunday brought the festival to a close, but not without another great day of artists; Sule, Jordan Lévesque, Chris Buck Band, Meghan Patrick, and The Washboard Union. Sule and Lévesque entertained fans throughout the day. As the evening started Chris Buck Band geared the crowd up and set the stage for the rest of the night. Patrick played a strong set and introduced fans to her great music. The Washboard Union has been making a ton of noise in country music and their jam-packed set showed fans just why they are emerging as one of Canadian country’s top bands.

In addition to the outdoor shows, fans had the chance to hang out at The Saloon, where various musical performances happened throughout the weekend. Overall the weekend was a great supply of endless music in a beautiful atmosphere for any country music fan and a successful first edition of the Festival New Country Brome. The success of the new festival confirms the strong interest of Quebecers in this dynamic and comforting style of country music and hopefully leads to a strong future for the festival.