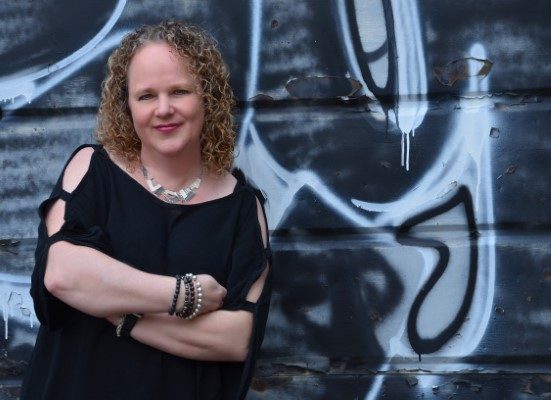 Toronto, ON-based award-winning and Juno-nominated jazz/ adult contemporary artist, Heather Bambrick has released a lyric video for her newest single, “Walk Between The Raindrops”. The single is from Heather’s newest album, Fine State, which also features twelve other stellar tracks that you should definitely check out.

Take a few moments to check out the video below, and find out more about Heather via our Five Questions With segment.

Hello Canadian Beats readers!  I’m Heather Bambrick, a born and bred Newfoundlander (townie) who’s now based in Toronto.  I love singing any and all styles of music, but for the past 25+ years, I’ve been working mainly in the world of Jazz.  (Ah, yes … a Newfoundland-born, Canadian Jazz singer!  No wonder I still have to introduce myself to people!!)  I’ve released 4 solo studio albums, including You’ll Never Know which was nominated for a JUNO award, and my latest Fine State.)

Hmmm … well, it’s ever-evolving.  The news project, Fine State, definitely features more elements and influences from the sounds and styles that I listen to outside of Jazz, particularly those that have inspired me as an artist.  So there’s some pop-flavoured stuff on there, as well as folk, rock, and even some R&B.  I like to say that, as a rule, my music is definitely based in the world of Jazz, but that there are elements of so many other things that allow me to reach a wide audience and hopefully keep everyone entertained.

As for my writing style, it’s also changed over time.  I think my natural inclination is to be more “classic” when it comes to an approach to melody, harmony, and form.  I tend to write more in the form of standards and less of the typical “verse, pre-chorus, chorus, verse, pre-chorus, chorus, bridge, chorus” style that is prominent in pop and rock music.  With that said, something like “Homeland” (from Fine State) was fun to write because of the chorus, which my pal – and fellow Newfoundlander – Keith Power added to the tune.  He said he could picture a bunch of Newfoundlanders sitting around a pub, glasses hoisted in the air singing to our Island Home, and that’s exactly how it sounds to me.  (Stay tuned for the video, which I’m filming in Newfoundland this right now!)

Yes!!  It’s been a very busy summer and continues in the same way through the fall.  I’m performing as part of the Music Niagara series on August 2.  I’ll be doing the Festival of the Sound Jazz Cruise in Parry Sound on August 5.  I’m joining the incredible bassist and composer Jodi Proznick (whose latest project Sun Songs was nominated for a JUNO this year) for a few upcoming shows, including August 9 at the Stratford Summer Music Festival, August 10 at the Jazz Bistro in Toronto, August 11 at the Burlington Downtown Jazz Festival, and August 17 at the Prince Edward County Jazz Festival.  I’m also performing with the Canadian Jazz All Stars (Guido Basso, Mike Murley, Dave Young, Robi Botos, and Davide DiRenzo) at the Algonquin Theatre on August 14, and I’ll be back with my own band at the Kincardine Summer Music Festival on August 16 and the Markham Jazz Festival on August 18.  Then, I look forward to taking a LONG nap on Labour Day weekend!!  (My full schedule, including some terrific shows in the fall, is at www.heatherbambrick.ca/shows.)

An audience member once best described my show:  “Carol Burnett meets Ella Fitzgerald at a Newfoundland Kitchen party!”  I thought that was a perfect description!!  I love to entertain.  I want people to come to a show, and forget all of their troubles for as long as they’re with me.  I want them to get lost in the music and stories and basically leave the show feeling better than they felt when they arrived.  The show isn’t about showing off musically, or doing “too much”.  It’s truly about connecting with the audience, making them laugh – and sometimes cry – and really just allowing them to feel thoroughly entertained from start to finish.  There’s always a lot of laughter and a lot of great music – plain and simple!

Ooooh …. tough question!  This is like Sophie’s Choice, here!!  Each song is so unique and stands alone on its own merit and for its own reasons.

Maybe “Wave Over Wave” from the latest CD (Fine State).  I love that it’s a Newfoundland folk song.  I love that it was arranged by my pal Mark Kieswetter.  I love the lilting folk feel that’s in there.  I love the harmonies that bring it to life in a different way.  I love the theme of the song:  being connected to something that holds you in a way nothing else can.  In the song, the main character speaks of the sea in this way.  For me, the thing that has the strongest old home me is music.  As the song says:  “there’s no other life … “

AND, If I get to choose from other records …

(I know, I know … it’s kinda cheating, but you never specified one song from ALL of my records!!

Ooooh!  There are SO many amazing Canadian artists!  I will always be a fan of my pal Laila Biali.  She’s simply astounding, both in her singing and her writing!!  I also love Suzie Vinnick and think she has one of the best voices anywhere!  Larnell Lewis is an absolute fiend or a drummer and I love not only his playing but also his writing.  I’ve recently begun listening to more of what Jeremy Dutcher is doing and I’m loving it!  I also LOVE the sound of the O’Pears!  These gals are just sooooo good!  We, as a country, are incredibly blessed with a lot of high-caliber musicians!  (I just know that in an hour, I’m going to remember another 10 or 20 artists to add to this list!)