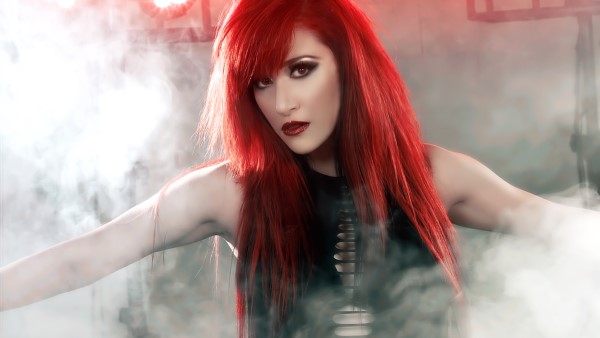 Monique – a classically trained vocalist, composer, and arranger – has been performing from a young age through charity functions and musicals before choosing to study music at university. Her first EP was released in 2011 and she began playing as a four-piece act not long after.

She describes her sound as Gothic Symphonic Metal – a popular genre in Europe – combining elements of hard rock, metal, and industrial music. In her sound, she adds additional influences from classical, liturgical, and darkwave music – “Dark, heavy, and Melodic” as she calls it. Monique proudly writes and arranges her own music, including any songs she covers. She says she prefers to write solo and provide her musicians with the finished arrangements.

Monique credits a range of artists as influences. Beethoven inspired her through his innovation and his legacy. Finnish cello metal band Apocalyptica came to her attention during university; she was amazed at their ability to play metal music on classical instruments – her connection to these musicians ultimately led her to discover European bands like Nightwish, and Within Temptation, inspiring her to take her music in new directions.

An avid reader, Monique looks to gothic novels and historical fiction to inspire her creative process. Drawing from non-musical sources, her debut album Genesis, which she calls a fairly conceptual album, was inspired by post-apocalyptic themes and the Biblical story of creation.

Her sound has become decidedly heavier, incorporating a darker, gothic sound. Because her sound is often underrepresented and more diverse than mainstream music, Monique says there are far more challenges as an artist – booking festivals, touring opportunities, and breaking into international markets are just a few that she continues to work towards. In the simplest terms, she says it often comes down to getting the music in the right hands and building the right support system.

Hoping to release more music in the future, Monique says she plans to continue to pursue her craft and build her fanbase, ultimately ending up on the same stages as some of her idols.

To keep up with Cecile Monique, fans and curious listeners can find her music on all online platforms; physical copies of her debut Genesis are available at select Sunrise Records in Canada, or on her official merch store.