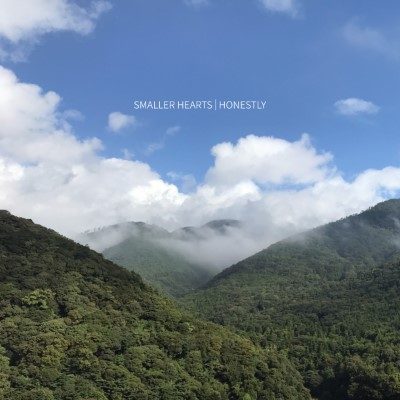 Nova Scotia’s Smaller Hearts are back with their sophomore album, Honestly, which has been primed as the soundtrack for hazy summer nights! The album features eleven tracks, including the single, “Cloud Cover“, which is the perfect electronic pop track, even for someone not familiar with the genre.

“We have a new record called Honestly. We began recording it not long after we finished our last record, in the hopes that we could expand our palette a bit while still keeping up the momentum from the first LP.”

Check out the album below, and find out more about the making of Honestly and more in our interview.

Can you tell us a bit about what influences you when writing?

The usual—things we were listening to, things we were reading. Long walks. Watching the seasons change. One influence was exclusionary: we self-imposed a ban on the synthesizer we used to record much of our first record, in order to drive us to find different sounds.

What was the biggest obstacle you faced when writing/ recording the album?

Our biggest obstacle in making this record was probably time. We both have day jobs, so making time for writing and recording could sometimes be a challenge. Also: deciding when a song is finished! It can seem counterintuitive, but the number of options that grow out of making electronic music can be paralyzing. Should the bass sound different even though it’s already been recorded? Easy! Should this song be 3bpm slower, or faster? Sure! It can sometimes require effort to just call something done and move on!

How do you decide which songs make it on to the album, and which don’t?

Most of our songs begin as instrumentals/sounds. We started with way more than we needed, maybe thirty? And that number got whittled down as we added vocal ideas and lyrics. Some tracks lived better as instrumentals and thus didn’t make the cut. Others didn’t sit well beside the others and got set aside for revisiting another time.

If you could just choose one song from Honestly to show to fans, which would you choose and why?

The last track, “Felt Time”. Partly because it’s more of a duet—we both sing a lot on the record, but elsewhere it’s all one of us singing “lead” and the other harmonizes. On this track, we alternate, which makes it theoretically the most representative of our overall sound. Plus we love the super weird drum sound.

Can fans expect you to be touring in support of Honestly?

We started getting really into rehearsing the songs from our first LP after it was finished—it was hard to find a balance between our recorded sound—lots of layers, no “real” instruments—and a good live sound. Eventually, we realized that the time we spent figuring out our live show could instead be spent writing and recording a new album, which is what we did instead and here we are answering questions about it! 🙂