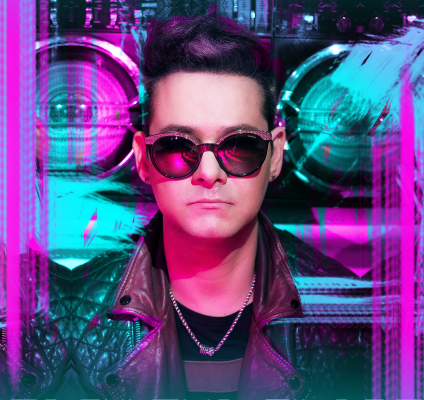 Canadian electropop DJ, artist, and producer Velvet Code released his new album Dreamer this past June. Following his singles “Break the Silence” and “Say You Love Me”, this album incorporates all aspects of Velvet Code’s musical talent. I had the chance to chat with Velvet Code, check it out to read about his thoughts on writing music, performing, and upcoming plans.

Your new album Dreamer was released on June 3rd! How have the last few weeks been, having it out in the world?

It’s been really interesting, getting comments and feedback on songs. Fans commenting on songs I didn’t think they would connect with. ‘Controlled Imagination’, ‘A Fire Inside’, and ‘Imagine People’ seem to be the three that are going around. The question is what’s going to be the next single? The fan’s perspective is most important, as much as I want to write music for me, I want my fans to be able to relate to it as well.

How does Dreamer compare to your first record Black.Blue.Blind.?

The first record was very experimental. This time it was a different process. I spent a long time writing, trying to be as honest as possible in the place that I was in. I spent a lot of time with Wendy Starland (who discovered Lady Gaga), she co-wrote 7 of the 9 songs on the album. She also really helped with the direction of the album. Dreamer is more mature, I’ve been through more tough times and seen people go through a lot of tough times. The messages are the same, there’s a message of positivity and hope, despite the tough times we all go through.

You performed “Mary Offered Ladybugs and Love Yous” on Breakfast Television Toronto, what an amazing opportunity! Was that exciting or nerve-wracking?

I was up at 3 am getting ready, making coffee. It was the first time I have performed that early and I battling a cold, but I think I pulled through. I’m hoping to follow up with a great performance at the ProudFM Stage at Pride this weekend in Toronto.

What do you love most about performing live?

The connection, connecting with the fans, with people watching, people interested in becoming fans. In my soul, it’s the most important to me. As much as I love recording, singing, and writing, performing is what touches me the most. I like to experiment with different setups like sometimes I’ll perform with a band, or just me and mic stand or a mic stand and dancers. On Breakfast Television I performed with a DJ keyboard. It’s unique each time, depending on how I feel.

When you write music, do you start with writing the lyrics or the melody?

If only it was that simple, a formula. It depends on my mood. Sometimes I hear a melody on the street, or words I hear someone say and I’ll think ‘hey those are cool words’ and I’ll alter them a bit and write a song. Like if I’m in an Uber and it’s raining, and the windshield wipers are going and I hear a beat and write off that beat. Whatever inspires me at the moment. If I plan something, it never goes that way. Like if I sit down to write a ballad, I end up writing an upbeat dance song, or the other way around. It’s mysterious. Have you ever seen August Rush? It’s about this boy and he’s a genius, he hears music with the trees blowing, he hears chimes. Everything is music to him, I’m not a genius but I tend to hear music in everything, the beat in my steps.

Are there any artists you’d love to collaborate with?

I heard this song a couple of months ago, still stuck on it. I was transported back to the ’90s, never lose that childish innocence. It was ‘1999’ by Troye Sivan and Charlie XCX. I heard they’re going to release a song called ‘2099’.

Intimately talking about a tour in the fall, late fall early winter. There’s not a lot of details on that right now, but I look forward to sharing those soon. Not really related to Canada, but I just secured a new territory deal in Asia, so I’ll be working on doing a tour there. In terms of Canadian shows, my team is actively looking at universities in Canada, that’s a really important market to me.

Really excited for pride. But we have to remember that it wasn’t always a celebration, it was once a riot. There were people that fought for our rights, so I like to pay special attention to older men and women. I like to wish a happy pride to everyone but the older people in their 70’s/80’s/90’s, I want them to know they are loved and appreciated.

Thanks so much for chatting with me, it’s been a pleasure.

Thanks so much for taking the time, I appreciate the continued support and I look forward to chatting again and sharing future detail with you.