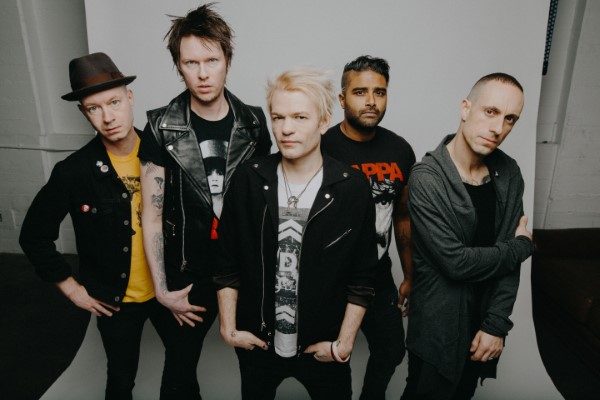 Canadian rock icons Sum 41 are set to release their seventh studio album, Order In Decline in just a few days, July 19th. Fans can expect Sum 41’s signature heavy drums, guitar, and aggressive beats, yet personal and raw lyrics. I had the chance to chat with Jason ‘Cone’ McCaslin about all things Sum 41. Check out the interview to hear all about Cone’s thoughts on new music and thoughts on touring and performing.

Hey, it’s Brooke from Canadian Beats and I am chatting with Jason ‘Cone’ McCaslin from Sum 41! How are you?

Good, thank you. So your 7th studio album Order In Decline is due out July 19.

I’ve heard this album described as ‘heavy’, but also the most personal. Can you tell me more about that?

Yeah, I mean it is on the heavier side of what we’ve done. I mean we’ve done heavy music in the past but this one as a whole I think if you listen to it front to back, it’s pretty in your face and aggressive and you know, fast. So that’s kind of the vibe. Lyrically, it’s personal, there’s a lot of different issues on it. On the last tour cycle, we were watching a lot of the news on our tour bus, CNN was constantly on so were watching what was going on, watching everything unfold, everything that was going on around the world and you know, it kinda slipped into the lyrics a lot. And we also tour the world and we’re lucky that we can tour the world and go to some countries and everyone has, a lot of different countries have chaos going on, not just America. So you know, we’re seeing all this stuff and you can’t help but right about it when you see it. Then there’s a song about Deryck never seeing his dad so that’s probably the most personal song on the record for him.

Yeah, absolutely. So you guys mixed and produced this album in yourselves?

Yeah, Deryck produced and mixed it.

Right, in his home studio?

Very cool. What kind of influences helped the writing and recording process? I know you did mention touring the world and seeing all of that, but did you have any influences for more of the instrumental side?

Yeah, I think it was mostly, in 2015 when the band kind of got going again after a long, long break. We went on this long tour, like it started in 2015 and I think our last show was last year in 2018 in September. So it was basically 3 years of touring and touring and touring and you know, getting the band back together and doing it again. I think it’s just, like musically seeing what fans are reacting to now you know, it’s like playing these songs and playing these songs and what are people into and what are we into playing? It was an exciting time for us and musically it was just coming off of ’13 Voices’ and making music that was exciting for us to play live. We had a conscious effort to want to have songs on this album that would translate good to live, that we could play the whole album live if we wanted to. Like we wouldn’t have to think about it too much, it would all just work and it would work with our old songs, it would work with newer songs and fans would like it.

That’s so cool to hear about. The first single released ‘Out For Blood’, how did you choose that as the lead single?

It was kind of like a collective agreement I guess. It gets narrowed down and the label says ‘oh we like these songs’ and the band says ‘we like these songs’ and the manager says ‘we like these songs’. So it gets narrowed down to like two songs or three songs sometimes and just the overall consensus was we want ‘Out For Blood’ cause it was a good representation of what the album was like. You know, the album is fast, the album’s heavy, there’s guitar solos on the album, and this one kind of just had, ‘Out For Blood’ had everything. We thought that it was catchy enough, it sounded like us, but it was maybe something that people hadn’t heard from us exactly before. It’s a lot of our favourite song, like if you asked the whole band what their favourite song was.

Yeah, I love it. So, in your latest music video for ‘A Death In The Family’! You travel back in time, which is pretty cool. And it’s like cut against the present, so how did that vision come about?

That was an idea that Director Rage had. It was just like a fun idea that he came up with. I don’t think there was too much going on like there was no statement we were trying to make. It was just like ‘hey we’re going to play in the ’60s and we’re going to play in 2019’ and that’s the video. There’s not too much behind it. You know we used to do all these crazy videos where we dressed up and did all this stuff, so it was just intriguing to us cause we got to get dressed up again, so we were like ‘that’s cool, let’s do that’.

Cool, I love that.

We still like making fun videos even though we’re almost in our 40’s.

It’s funny you say that. My next question was Sum 41 has been a band for a long time. And I know stuff has changed but how has your view of music and performing changed since you started out?

How has it changed? I don’t think it’s actually really changed. I was just doing an interview before, saying like we still have this mindset when we go to festivals and we still try and think of ways, like how does our band stand out at this festival? How can we stand out as a band? And that’s kind of what we were doing when we were teenagers. When no one knows who you are, trying to play these festivals, how will people walk away thinking about your band. For some reason, I think it’s just ingrained in us, that we always have to stand out and we always try our best to be ‘the band’. Even when we’re headlining, we want people to walk away and go ‘wow, I gotta go see that band again’. So, I don’t think it’s really changed much, our outlook is pretty much the same.

It was a great experience. Do you ever get tired of playing songs like ‘In Too Deep’, like all your hits that have been around for a long time?

No, I don’t think so because if the crowd didn’t like them, say like we played ‘Fat Lip’ and the crowd was just kind of staring at us with weird looks on their faces, then I’d be like ‘maybe I hate playing this song’. All the old songs get pretty good reactions, you know like ‘Fat Lip’ still gets the biggest reaction of the show.

Oh, yeah for sure.

So, it’s hard. It’s hard to hate a song or hate playing a song when the crowd loves it so much. Like, it’s just so much fun.

No, that’s fair and I mean that is the most important part, is the enjoyment of the crowd.

Yeah, if the crowd hated it then we’d probably hate it, but.

That’s fair. What are some of the important lessons you’ve learned throughout your career?

Ooh, I don’t know. Um, I mean I guess the biggest thing was seeing Deryck go through his alcohol addiction. A good wake-up call for all of us I think. That’s probably a life lesson, not even just in music, in life. And I think we were all probably abusing our bodies a little bit too much, especially back in the 2000s and through our 20’s. I think we all can tour better now, we’re better to our bodies, we don’t wake up every day hungover and hating the world. That’s probably the biggest lesson and unfortunately, Deryck went through what he went through and I think we all looked at that as a wake-up call and a huge lesson.

For sure. Okay, favourite new song at the moment, go!

On the new album?

Well obviously I love ‘Out For Blood’, but I would say, there’s this track on the new album called ‘Turning Away’ and that’s definitely one of my favourites. It’s kinda got everything, it’s got like a nice piano, it gets kinda heavy, it’s got the fast chorus that’s catchy, a cool guitar solo, a couple of cool riffs. Kind of like how I would describe ‘Out For Blood’, it’s got everything we do, all in one song.

You’re heading out on tour very soon, are you excited to debut new music?

Yeah, we’re going on this Disrupt Tour, we join on Wednesday but we only get a 45-minute set so there are not too many new songs we’ll be playing but we’ll definitely play ‘Out For Blood’. But once the new album comes out, and we go on our full world headlining tour, yeah. It’s always amazing playing new songs. You play these new songs and you don’t know how the crowd is going to react, you’re just feeling it out. Like is this song going to work? Are they going to like this one? It’s a great song but does it work live, does it translate live? So it’s always like this feeling out process. And on the last album, ’13 Voices’, we ended up playing the whole record, we played every song off that album and there were definitely a couple of songs that we were like ‘uh I don’t know if that one works live’. It’s always a process of trying them and seeing what works and where to put them. It’s all exciting.

Looking forward to seeing it all come together. What do you love most about performing live?

I think it’s just like, the energy from the crowd. Nothing can compare that feeling of playing in front of thousands of people and having everyone sing the songs that you worked so hard on, for the last twenty years and having them sing back the lyrics. And having it mean so much to them, so it’s just the energy from the crowd really. You can’t really compare, it’s an unexplainable thing.

Yeah, for sure. So, lots of exciting stuff, what else do you have in store for 2019?

This Disrupt Tour that we’re going on, then we’re doing a couple of Canadian shows in August. Saskatoon, Toronto at Echo Beach, Victoriaville Festival after that, then taking a couple of weeks off. Then we’re just in the process of building our fall tour, and we’ll probably go right up until Christmas. Stuff will be announced in the next couple weeks, we’re just ironing out the details.

Awesome, I think we covered everything! Thanks so much for chatting with me, I really appreciate it.

Awesome, yeah thanks for the chat. Thanks for having me.