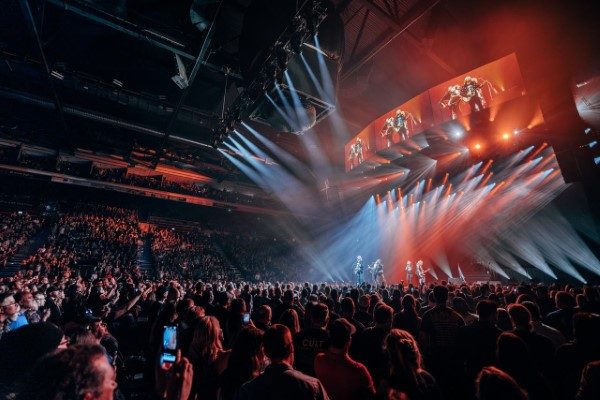 In today’s modern music, the market has been saturated with genre after genre, artist after artist, computers & and auto-tune vying to carve their place in the industry to build a career.  It is very rare, with all these challenges, to have a career that spans more than 1 or 2 albums.
With that challenge, it becomes more and more rare to find an artist with lasting power touring and selling out major venues.  It is always the greats, McCartney, Rolling Stones, Queen, but those shows are usually MASSIVE venues, and the number of shows are fewer (especially in Canada).  This is why, it is always great when Halifax brings in a fantastic band, with an extensive catalogue to entertain the concert goers.
Within 24 hours of tickets going on sale Def Leppard sold out the Scotiabank Centre.  When they decided to open up more seating, they sold out instantly as well.  To say Nova Scotians were excited to see a big act hit the capital city would be an understatement.  We love our rock, and it shows!  Tonight was the first of 11 Canadian shows with Tesla.
Def Leppard has a 40+ year career.  Within that time, they’ve had a plethora of massive hit after massive hit.  Once I was able to get to my seat (with 10 minutes to spare), there was very little time to sit back and relax to enjoy the show.  Once the band hit the stage, the entire arena was on their feet, singing, cheering, clapping, screaming, and spilling their beer to the beat of the songs.
On a side note, I am pretty sure that the entire band are time lords… It was like they stepped out of their TARDIS and the band from the 1980s came out and blew everyone away.  You can have musicians that sell LOTS and LOTS of albums, but when you get to a live show, you lose part of that sound in their performance.  This was definitely not the case with Def Leppard.  Joe Elliot sounded just as good today as he did when he recorded “Bringing on the Heartache” in 1981 for the High ’n’ Dry album. The voice did not change, the energy of the band did not change, and neither did the crowd!
90 minutes of solid hits is what we got!  It was loud, it was emotional, it was nostalgia.  It is a concert that I will never forget.  Def Leppard shows no signs of slowing down, and I cannot wait until they return to Nova Scotia to perform again!