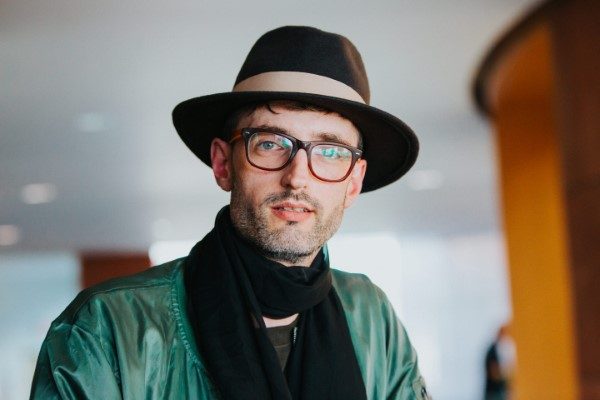 Ontario’s own Luke Cyrus Hunter has released a video for his single, “Old School Jam” which pays tribute to a number of sources: hip-hop artists of the 80s, 70s RnB, and the city of Toronto.

You definitely won’t be able to stop yourself from dancing around the room, singing along and then listening to all the artists mentioned in the track. Trust me.

“I can remember when Hip-hop was new, and artists like Rob Base, Run DMC, and Young MC were breaking into popular music; it was fun and exciting. That was the starting point for this song…and as I was writing it, I realized I wanted to show my appreciation for these artists, and the inspiration that they have given to me.”  Luke Cyrus Hunter

Looking for inspiration, I started listening to some Young Mc tracks.  “Gotta Roll With the Punches” caught my ear, so I wrote the name of the song down.  I also came across an artist by the name of D Train, who I had never heard of, and his song “You’re the One For Me” so I wrote that down too.  Later on, when I looked at the paper I realized I had the first line for my song: “D Train, You’re the One For Me/ Gotta Roll With the Punches like Young MC”. It was too good not to use.

I decided to push myself and my artistic capabilities by creating a music video for the song I had written. This was my first time shooting a music video on my own. My goal was to incorporate the concepts of creativity and design thinking (that I have been learning about in a class at Laurier University) into the artistic process of making this video.

It was important to me that I show appreciation for this music that I was referencing. The goal of the video was to not only create an engaging and novel video, but to make connections to the lyrical content, and to pay tribute to black culture and some or all of the artists whom I mention in the song.

The video also features my daughter, Rachel Maffa Hunter, who is a natural dancer and entertainer.  Myself, my wife, and Rachel spent a cold March day shooting the video together.”

Check out the video below, and find out more about Luke in our Five Questions With segment.

My name is Luke Cyrus Hunter.  I’m from Kitchener-Waterloo, and grew up in London, Ontario.  I’ve been playing music since I was 6 years old.  I’ve had the chance to travel all over the world playing music and meet lots of people.  I have an interest in culture and diversity, and I try to incorporate that into my songs. I try to focus on the positive.

I think of myself as being pretty diverse musically. I want my music to reflect this diversity, so you might hear me exploring different styles like funk, jazz, hip-hop or rock within my songs, but always done with a solid groove and danceable beat.  I also really like to mix retro sounds with modern sounds.  With that in mind, I just see what I can come up with when I’m writing a song.  I usually know when I’ve found something that I can work with if it sounds fresh, exciting and new.

Lyrically, I try to tell a story or have something interesting to say. In my new single “Old School Jam” I was able to pay tribute to the music I remember from my childhood by referencing a lot of songs and artists within the lyrics. Sometimes songs don’t always turn out how you thought they would, but with this one, I think I got it right.

I’m performing a set Aug 1st at Maxwell’s in Waterloo, and Sept 7th I’ll be at the Cameron House in Toronto with Sandra Bouza performing as well. A full list of dates is on my website Lukecyrushunter.com

As far as the show goes…I like to create a fun, interactive vibe while performing.  The music is great for listening or dancing to.  I play keyboards and sing.  I actually just got a keytar, which is a smaller keyboard you can stand and play, similar to guitar. With the keytar, I’m able to come up front more easily and connect with people during the performance.  My band has a drummer, guitarist, and bass payer that are all amazing musicians! We try to create memorable moments within the show that people will really remember.

I would say start with the newest one, which right now is Old School Jam.

I’m into Chromeo, Arcade Fire, K-OS, and Metric.  K-W area has some really great talent, like Joni Nehrita! And Sandra Bouza from Toronto is a great singer.